An Evening of Prayer in Vienna 2017 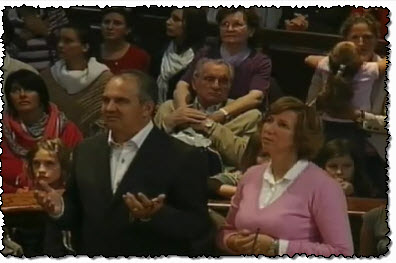 Ivan and Marija greet Our Lady at St. Stephen’s Cathedral
at a previous Evening of Prayer.

September 25, 2002 “Dear children! Also in this peaceless time, I call you to prayer. Little children, pray for peace so that in the world every person would feel love towards peace. Only when the soul finds peace in God, it feels content and love will begin to flow in the world. And in a special way, little children, you are called to live and witness peace – peace in your hearts and families – and, through you, peace will also begin to flow in the world. Thank you for having responded to my call.”

Today a very special prayer event is taking place in St. Stephen’s Cathedral in Vienna. There will be testimonies, the prayer of the Rosary, Holy Mass and Adoration of the Blessed Sacrament, all in response to Our Lady’s call from Medjugorje to pray for peace. Here is a description of the event and the speakers:

The 10th Prayer for Peace in Vienna’s St. Stephen’s Cathedral
Since 2008, and under the patronage of Christoph Cardinal Schönborn, the “Message for you” – Prayer for Peace in Vienna’s St. Stephen’s Cathedral has taken place once each year. This year, too, our Cardinal will join together with thousands of people in the cathedral to pray for peace and to celebrate the Holy Mass.
At the beginning of August 2017, Cardinal Schönborn, who himself spent New Year’s Eve (2009/2010) in Medjugorje, wrote a message to the thousands of young people who had gathered from all over the world at the Marian pilgrimage site in Herzegovina. There they had come together for a youth prayer meeting and the address the Cardinal wrote for them was translated into many languages:
Dear young friends,
Once more you have come to Medjugorje in such great numbers. No one commanded you to travel here in the heat of summer. You do it because it is a matter close to your heart. Otherwise, you would have not have taken this effort upon yourself! What moves you to travel to Medjugorje? It is not something fashionable, a trend, a fleeting excitement. It is a special closeness, it is the closeness of the Gospa, which draws you here. …
With great joy, we look forward to having Ernest Cardinal Simoni at this year’s prayer for peace on October 24th. Cardinal Simoni came to give Pope Francis’s blessing to the thousands of young people who gathered in Medjugorje from sixty-nine countries at the beginning of August. His Eminence was ordained to the priesthood in 1956 in Albania, was imprisoned by the atheistic persecution of the Church in 1963, and in the following eighteen years was twice condemned to death. After he was released in 1981, he worked as a canal worker and exercised his priestly ministry in secret. When the communist regime collapsed in 1990, he was allowed for the first time officially to take up his priestly ministry.
During the apostolic pilgrimage of Pope Francis to Albania in 2014, then Fr. Simoni had the chance to meet the Pope. After the Pope heard his testimony, he embraced him with the words: you are my saint! On November 19th, 2016, Pope Francis appointed him to the College of Cardinals.
The visionary Marija Pavlovic-Lunetti will participate in the prayer for peace this year as a special guest from Medjugorje. Marija attests to seeing the Mother of God daily since June 25th, 1981. Since March, 1984, Marija regularly brings messages for the parish of Medjugorje and the whole world, every Thursday at the beginning and since January of 1987 on every 25th of the month. The content of the messages is an invitation and at the same time an introduction to the spiritual life.
Fr. Marinko Sakota, O.F.M., studied theology in Sarajevo, Zagreb, and Fulda, and since 2010 fulfills the role of spiritual director in Medjugorje. Beginning in 2013, he was made pastor of the pilgrimage site and has up to this point implemented countless measures to deepen the spiritual life there.
At the prayer for peace, Fr. Marinko will give us an insight into his responsibilities and his encounter with Archbishop Henryk Hoser of Warsaw-Prague, whom Pope Francis commissioned as delegate for pastoral care at the pilgrimage site.
The Swiss artist Hubert Theler has visited Medjugorje on a regular basis since 2003. In numerous photographs, he has captured the stones on Cross Mountain and Apparition Mountain, and his conviction grows ever deeper that here a transformation in the hears of men is taking place, in the sense that Fr. Jozo Zovko once expressed: The Mother of God takes our heart of stone and lays it on the Podbrdo, and gives us a new hart. Thus, a new man comes down from the mountain. The fascination with the stones of the two mountains is captured in his book, Living Stones of Medjugorje, which was presented in January of this year in the parish of Medjugorje.
Through the events in Medjugorje, great humanitarian works have been inspired in the past several years. Mary’s Meals, an initiative addressing hunger and nutrition and placed under the protection of the Mother of God, today feeds over 1.2 million children on every school day in fourteen of the poorest countries of the world. Magnus MacFarlane-Barrow, who first visited Medjugorje as a fourteen-year old and then founded Mary’s Meals as a young adult, will report on the efforts of this initiative in several countries of east Africa, which are particularly afflicted with drought and civil war.
This year the Cenacolo Community celebrates the twenty-year anniversary of its establishment in Austria. At the prayer for peace, the boys of the community will, as in past years, put forward a joyful sign of their gratitude concerning life gifted to them anew.
For more information: www.friedensgebet.at

Because Mary TV will live-stream this wonderful event, our schedule will change. There will be no Hour of Mercy today, to make way for the Daily Rosary which will be live at 3:00 pm Medjugorje time. The Vienna prayer event will begin at 4:00 pm Medjugorje time on our channel. Here is the broad outline of the program from Vienna:

I hope you can join us at www.marytv.tv for this evening of prayer for peace from Vienna!!

PS. Marija’s daily apparition will probably take place during the Rosary from 6:00 pm to 7:00 pm. Our Lady will bless us all during that time!!