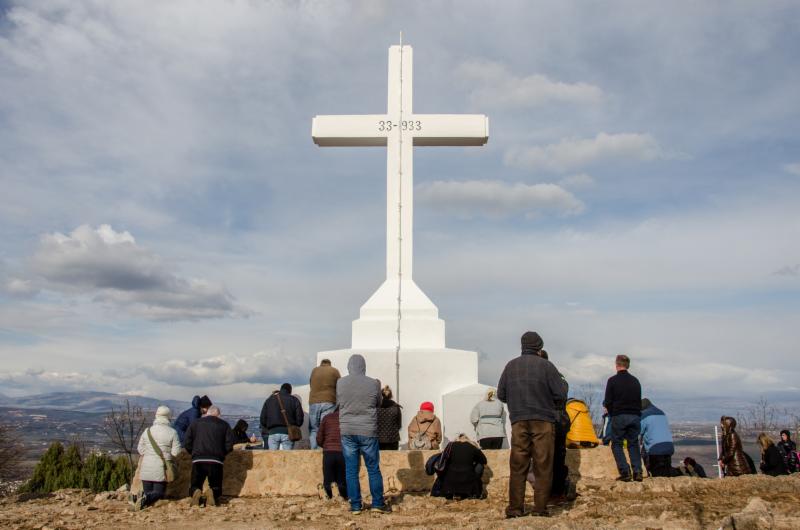 “Dear children! In this time of grace, I am calling all of you to open your hearts to God’s mercy, to begin a new life through prayer, penance and a decision for holiness. This time of spring moves you to a new life, to a renewal, in your thoughts and hearts. Therefore, little children, I am with you to help you to say ‘yes’ to God and to God’s commandments with resoluteness. You are not alone; I am with you through the grace which the Most High gives me for you and your descendants. Thank you for having responded to my call.” (March 25, 2017)

Our Lady calls us to begin a new life, to open our hearts to God’s mercy! The Gospel for the 4th Sunday of Lent was about the man born blind, and how Jesus gave him a whole new life when he gave him a new capacity for sight. We need to have such new sight in order to live our new life as well. Fr. Leon explained this process so well in his homily, that I had to transcribe it!

The Gospel we heard does not tell the healing of a blind man as we find in the other Gospels, but of a man blind from birth. What’s the difference? I can imagine losing my sight. And though it is hard to appreciate the courage it would require to live in the world with the loss of what is so easily taken for granted. But how does a person born blind experience the world.   How does he imagine the other things perceived with the other senses? Things they have never seen or looked upon.

That the man in this Gospel is born blind is not a peripheral detail. He has not lost a capacity for light. He did not have it from the beginning. He does not deal with light, darkness, shadow and reflection. Jesus will not restore sight to this man. He will grace him with a capacity that he never had.

This miracle does not point just to the restoration of our human nature, but also to its total recreation. It says, “Never since the world began has it been heard that anyone opened the eyes of a man born blind.” What Jesus is to do will bear resonance on the very beginning of creation. He will reach into the very origins of human beings, and do something that has never been done before. He will restore their capacity for the light which shines in the darkness.

Just as God made man from the dust of the ground, so Jesus makes the man who was born blind receive his sight through the dust of the Jerusalem street and forms him anew. Just as the first man, Adam, received the breath of life and became a living being, so this man is anointed with dust mixed with spittle from the mouth of Jesus, and becomes transformed beyond recognition.

His neighbors will ask of him, “Is this the man who used to sit and beg in our street?” As Jesus was manifested after his Resurrection, the man born blind, once he has his sight is not easy to recognize. So deep and profound is the transformation that has happened to him.

Now up until this time the man born blind is passive, he is a passive witness in the whole story. He is almost like the earth in Genesis, “formless and void.” But now he has found his voice, he begins to speak for himself. His parents refuse to answer him. His present state is different from anything he received from them.

This is like ourselves. You have children and you give them life, even though you know that life doesn’t come from you. And you bring them to church and have them Baptized, and they receive something they could never have received from you – eternal life! And later when they grow up and they are confirmed, they answer for themselves, just like the man born blind.

And the man born blind answers the questions of the Pharisees. Because with his sight he has an increase in insight into who Jesus is, without yet having seen Jesus. So the man who owes his new being not to his parents, or to his pedigree in the law of Moses, but to the sudden unearned gift of the encounter with Jesus. Falling down to worship Jesus, he recognizes Him not just as the source of his sight, but more importantly as the origin of a whole new way of being.

In Jesus, we are elevated to a new life. As the man born blind received a new capacity, a new way of experiencing the world, so too do we receive a new capacity for a deeper way of life. To come to experience the material world all around us in the unfamiliar light of Jesus who is forever the light of the world.

When we say the things we say, like “Our Father”, this is one of the most extraordinary things we can say. Not simply because God is a father to us and we think we have a personal relationship with Him. But because when we say, “Our Father” it is literally true. God is not our father in a metaphorical sense alone, He really is our Father. We who are the creatures of his hand who never deserved anything from Him, who are made simply out of love, He makes his children, and by the Holy Spirit raises up to be friends with God. This is absolutely extraordinary!

If we are friends of God, then everything we do in the world is suddenly different.  You see, sin is easy.  And sin is boring.  Everything under the sun is a repetition of what has come before.  We only take a mishmash of old stuff and put it in new configurations, and make what we think are new sins.  But they are the same old stuff.  The only thing that is new is the thing that comes from beyond the sun.  The Son of God Himself!  And if He gives us life, we truly have new life.

Our first parents in the Garden had their eyes opened when they sinned.  They saw how far we had fallen from God.  They saw their nakedness and they were ashamed.  But we have our eyes opened in a new way, just as the disciples at Emmaus.   When they saw the Lord in the Scriptures and in the breaking of bread, and then they recognized Him.  And we perceive the new clothing of our humanity is with the Divine nature.

These are not metaphors I’m using.  I mean this literally.  We are clothed with Divine nature.  What does that mean?  Ponder it.  Because it’s the most extraordinary thing in the world.  We have received this new capacity for new life in our Baptism when the Lord Himself anointed us with His Holy Spirit.  But this capacity in us weakens through sin.

Original sin is a bit like a straw.  If you bend it and it has a kink in it, it will always tend to bend in the same place again.  And so although our original sin is wiped away, that capacity, that tendency to sin remains in us, in the same place wherever that is for us.  And we therefore are more accustomed to darkness then to light.  And so each year we come back to this holy and joyful season of Lent when we open ourselves to the healing touch of Jesus, prepare ourselves once more by His grace to see the world anew in the blazing furnace of the Paschal fire.  A light lit in a darkened tomb two thousand years ago which will never more be put out.  Which cannot be overcome.  This is the new life we are given.  In the name of the Father and of the Son, and of the Holy Spirit, Amen