You must be smaller than others. 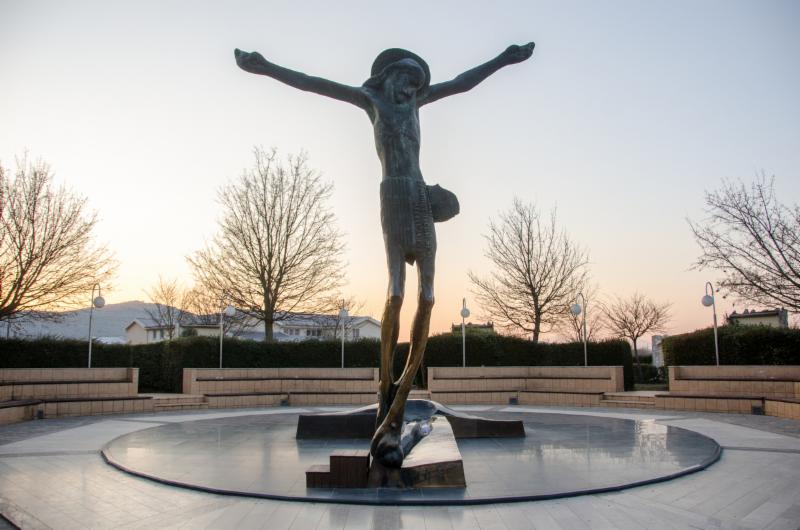 Well, I had another sort of Holy Spirit moment at Mass yesterday, so I’m going to share it! It was, of course, during the Eucharistic prayers. I remembered these words from Our Lady’s message on January 2:

“Dear children, My Son was the source of love and light when he spoke on earth to the people of all peoples. My apostles, follow His light. This is not easy. You must be little. You must make yourselves smaller than others; with the help of faith to be filled with His love….” (January 13, 2017)

I thought about Jesus who is the source of love and light giving Himself to me at that moment on the Altar. And I realized that Jesus is truly smaller than others! Our Eucharistic Lord is so very small.

I remembered His resurrection, and how He did not make a big deal about it to the whole world. Anyone else who had been treated as Jesus was treated (i.e. tortured, reviled, spat upon and crucified before all of Jerusalem) and then was raised, would have come roaring back from the dead! It would have been the day of reckoning. All His detractors and murderers would have been slain on the spot, and the whole Roman Empire taken over by Him.

But Jesus is not anyone else! He who had the right and power to take over the whole world, came back in a most hidden and quiet way. Though the accounts vary, it seems that Jesus rose from the dead, unseen by anyone. Mary Magdalene and the women came afterwards, and only saw the empty tomb and an angel. Mary Magdalene met Him and thought He was a gardener! Peter only saw the empty tomb and went to tell the others. Two disciples who were dejectedly walking to Emmaus encountered the Risen Christ, but they didn’t recognize Him, even after miles of walking and talking together. It was only in the breaking of the bread that they realized it was Jesus, and He immediately disappeared. And then Jesus noiselessly entered into the upper room, going through the closed door, to greet His terrified Apostles! They thaught He was a ghost! Not very triumphant is it!!

Even later, at the Sea of Galilee, Jesus appeared as a lone man, on the beach, cooking fish. Truly, for the Resurrected Victor over Sin and Death, Jesus’ return was small. And He remained hidden and small until He ascended to the Father. And He is even smaller to this day, as the Eucharistic Lord, made present in Bread and Wine.

Well, it occurred to me that if Jesus chose to return to us in so humble a manner, when He could have stormed on the scene in power and might, then no wonder we are supposed to be small as well. We can learn from Him how to be smaller than others, to always approach our families and friends, parishes, communities and strangers with the same humility that He showed and shows us.

There must be something important about this humility. It must unlock tremendous graces for those around us. Maybe it makes it possible for them to feel love. Maybe it helps create the peace that is so desperately needed in our world today.

It certainly stands in contradiction to the powers of the world, both human and demonic. Humility is outside the comprehension of all that is evil. It only makes sense in terms of heaven, of God our Father, Jesus our Savior, and the Holy Spirit our Paraclete.
To be little means to be in right relationship with the Trinity. Then they can work in us and through us.

Our Lady is right; it is NOT easy. But it is the way to follow Jesus! He us our great example!!