Become my extended hands in the restless world that longs for peace! 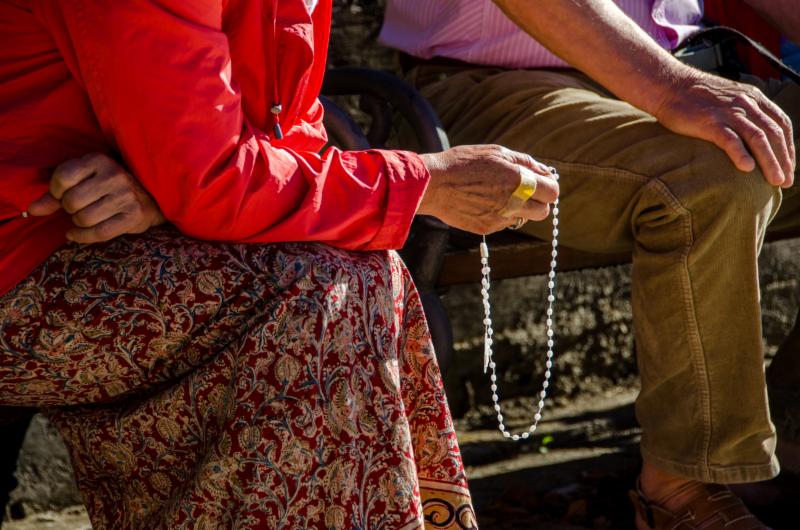 January 25, 2012 “Dear children! With joy, also today I call you to open your hearts and to listen to my call. Anew, I desire to draw you closer to my Immaculate Heart, where you will find refuge and peace. Open yourselves to prayer, until it becomes a joy for you. Through prayer, the Most High will give you an abundance of grace and you will become my extended hands in this restless world which longs for peace. Little children, with your lives witness faith and pray that faith may grow day by day in your hearts. I am with you. Thank you for having responded to my call.”

There are times when we actually see Our Lady reach out to her children through someone, almost as if they are her extended hands. I am so happy to share a true story with you, as relayed by John Harpole, from Colorado, in which Our Lady did just that! Let us rejoice that Our Lady wants us to receive abundant graces and become her extended hands in the restless world which longs for peace. Isn’t that the answer to our current woes? To reach out with the love and peace of Mary!!

A ‘THIN PLACE’ WITH THE BLESSED MOTH ER
By John Harpole

When my Aunt Pat died suddenly in Amarillo, Texas, we were all stunned by what some would refer to as the “end of her story.” But her story didn’t end there.

It’s the story the week after her death that will send a warm feeling up your spine, reinforce your spirituality, or perhaps erode at least some degree of skepticism you might have been embracing.

This story’s main elements include our Blessed Mother, a rosary and Aunt Pat.

The day before the funeral, my Amarillo sister-in-law, Eileen, accompanied Aunt Pat’s only daughter, Missy, on what otherwise would have been a lonely mission to the mortuary.

Missy was carrying the burden of all things that day, and when the funeral director asked her for Aunt Pat’s rosary to be buried with her in her hands, Missy drew a blank She didn’t think to add a rosary to the long list of things she was delivering to the funeral home that day.

Eileen came to the rescue, not hesitating to offer up her own rosary. It was a special rosary from Medjugorje, given by a friend who had visited that very holy place. Eileen had carried it with her for 15 years and her constant use of it had actually given the chain between the beads a golden hue.

Later that night, Eileen shared the story of the trip to the funeral home with me. I could tell that she was going to miss that rosary. I even made a mental note to track down another Medjugorje rosary as a replacement for her, even though I clearly sensed that nothing could replace the special significance Eileen attached to that rosary. Hers was a generous gift at the right time and place.

I was reminded of that “mental note” five days later, after 6:30 a.m. Mass. It was the first daily Mass I was able to attend after my Aunt’s funeral and it felt good to be home in Denver.

I was standing in the back of church with friends, sharing the sad news of last week, when a woman approached us. I knew that I had met her once before, but couldn’t place her name. She always sat about five pews behind me at daily Mass.

She said “Excuse me for interrupting but I was praying last night and the Blessed Mother told me to bring this rosary to mass today and give it to someone. She told me that when I got to church she would tell me who to give it to.” She looked directly at me and then said, “She told me during mass to give it to you.”

She handed the rosary to me and then said, “It’s from Medjugorje …”

My knees buckled and I began to cry. I did my best to tell her the story of the prior week but I’m afraid that it only came out in incoherent bits and spurts while I wept.

UNBELIEVABLE … or is it?

Just five days before, at my Aunt Pat’s funeral, her Pastor Fr. John, spoke about an ancient Irish tradition dealing with “thin places.” He described them as a “place in time where the space between heaven and earth grows thin and the Sacred and the secular seem to meet.”

I’m writing this story to thank our Blessed Mother for creating and sharing that unforgettable “thin place” in the back of St. Mary’s church this past Tuesday morning.

You can help by sharing this story with others and let them know that our Mother Mary, is always there for us.

By the way, FedEx completed the sacred journey of that rosary as I write this — back to Eileen in Amarillo.

Thy will be done.

Thank you, John, for sharing this beautiful story with us. We rejoice that you were touched by Our Lady in such a direct way, through this wonderful woman, a true daughter of Mary, who became her extended hands. Praise Jesus and Mary!!

Oh, and I believe that Medjugorje is one of those “Thin Places!!”