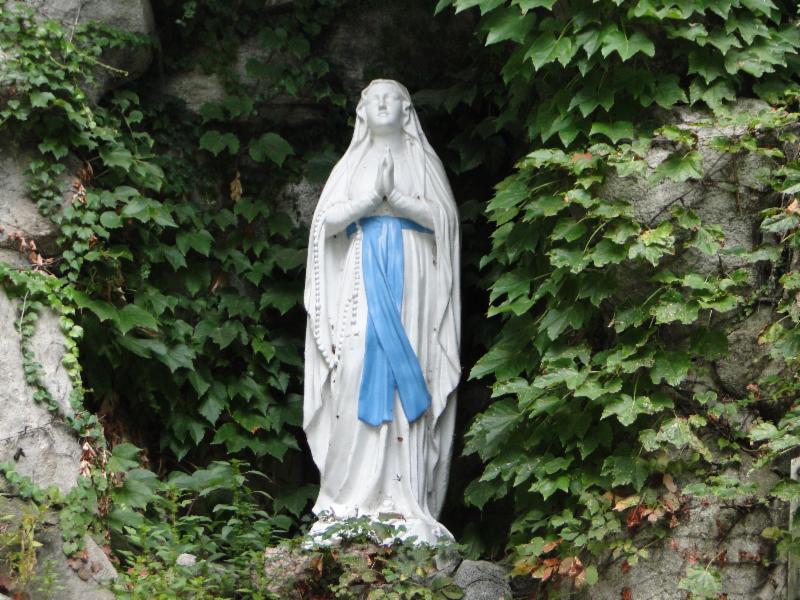 “I am the Immaculate Conception”

One more day, I want to linger over the great mystery of the Immaculate Conception.  Here is something I wrote back in 2014 about it!

And indeed it is wholly fitting that so wonderful a mother should be ever resplendent with the glory of most sublime holiness and so completely free from all taint of original sin that she would triumph utterly over the ancient serpent. To her did the Father will to give His only-begotten Son – the Son whom, equal to the Father and begotten by Him, the Father loves from His heart – and to give this Son in such a way that He would be the one and the same common Son of God the Father and of the Blessed Virgin Mary. It was she whom the Son Himself chose to make His Mother and it was from her that the Holy Spirit willed and brought it about that he should be conceived and born from whom He himself proceeds.” (“Ineffabilis Deus” – quoted from “Madonna, Mary in the Catholic Tradition. Fr. Frederick M Jelly, O.P. p. 100-101)

Don’t you love this! Our Lady is so connected to the Trinity, so much chosen by all three Persons!! She is in the heart of their plan to save humanity!!

But as the Dogma explains, it is clear that Mary is just as saved that by plan as all the rest of us. The Dogma declares:

We declare, pronounce, and define that the doctrine which holds that the most Blessed Virgin Mary, in the first instant of her Conception, by a singular grace and privilege granted by Almighty God, in view of the merits of Jesus Christ, the Savior of the human race, was preserved free from all stain of original sin, is a doctrine revealed by God and therefore to be believed firmly and constantly by all the faithful. (PTOL 80-81)

The key words are “in view of the merits of Jesus Christ, the Savior of the human race, was preserved free…” Our Lady was preserved from original sin, by the salvific act of her Son! Jesus saved Mary from original sin at her conception through His death and resurrection, even though Jesus’ death was to happen years later! (It’s a bit like “Back to the Future”.)

And Our Lady referred to this unusual grace in one of her messages:

March 02, 2013 “Dear children! Anew, in a motherly way, I am calling you not to be of a hard heart. Do not shut your eyes to the warnings which the Heavenly Father sends to you out of love. Do you love Him above all else? Do you repent for having often forgotten that the Heavenly Father, out of His great love, sent his Son to redeem us by the Cross? Do you repent for not yet having accepted the message? My children, do not resist the love of my Son. Do not resist hope and peace. Along with your prayer and fasting, by His cross, my Son will cast away the darkness that wants to surround you and come to rule over you. He will give you the strength for a new life. Living it according to my Son, you will be a blessing and a hope to all those sinners who wander in the darkness of sin. My children, keep vigil. I, as a mother, am keeping vigil with you. I am especially praying and watching over those whom my Son called to be light-bearers and carriers of hope for you – for your shepherds. Thank you.”

“Do you repent for having often forgotten that the Heavenly Father, out of His great love, sent his Son to redeem us by the Cross?”

There, she said it! The Father sent His Son to redeem us… Jesus came to redeem us all, including Mary, though her grace was prevenient, it came before He was conceived. And she was set apart for her great role in the redemptive plan.

Well, in the Immaculate Conception we celebrate that prevenient grace. We stand in awe of the Trinity’s great love for us all, such great love that would provide for such a Mother for Jesus, and such a Mother for us. We now have this Mother who is “full of grace” as our Mother. And she is with us in a special way in Medjugorje.

Thank you, dearest Mother, for being with us. Help us to keep vigil with you, praying for all those who do not yet know the love of your Son. May your Motherly and Immaculate Heart triumph in our day!