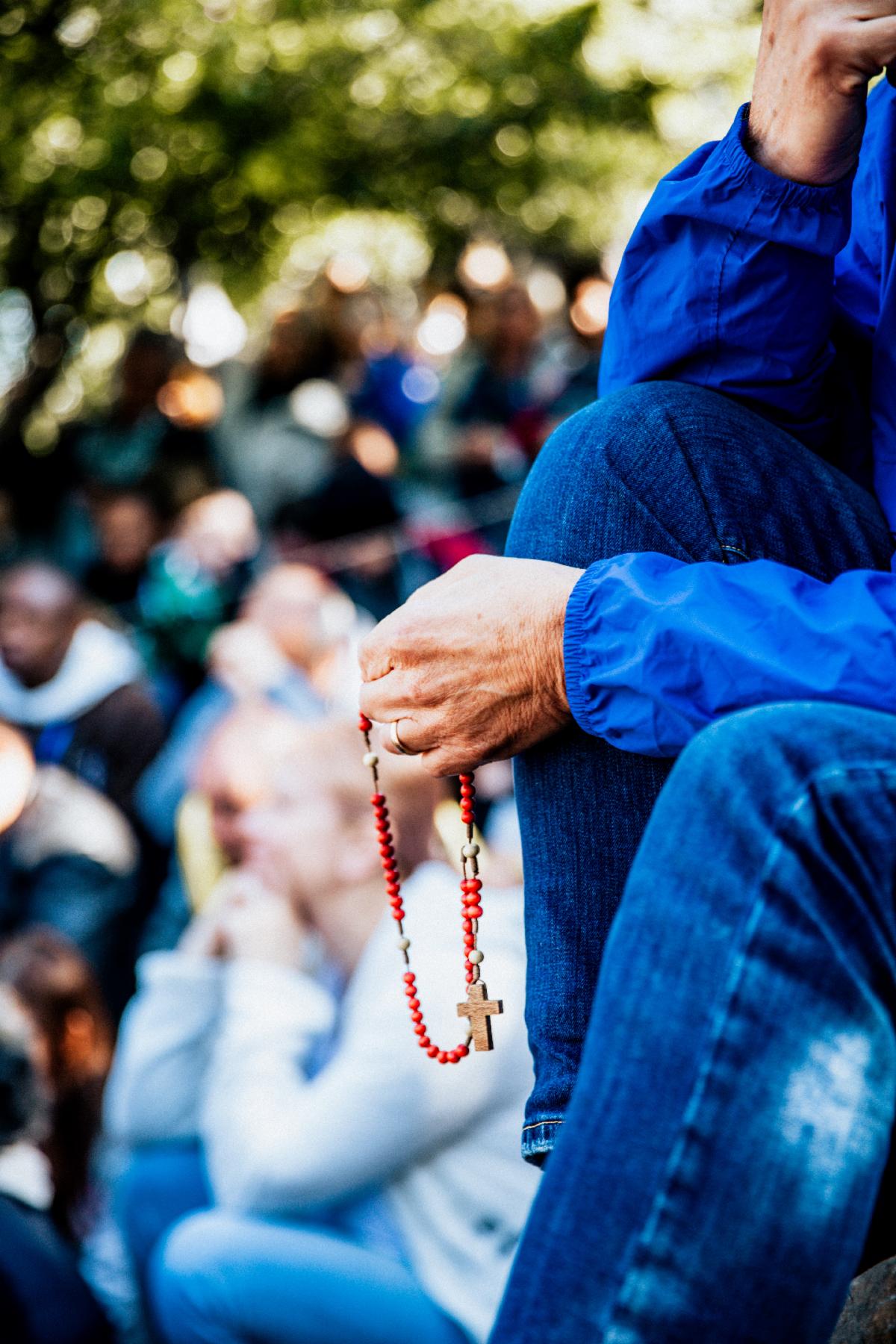 “…My children, my Son pronounced the words of the ‘Our Father’-Our Father, [you] who are everywhere and in our hearts-because He desires to teach you to pray with words and feelings. He desires for you to always be better, to live merciful love which is prayer and limitless sacrifice for others…”
(January 2, 2020)

The Catechism of the Catholic Church spends some time talking about the great grace we have been given through Jesus, to be able to call God “Our Father”. We should be in awe at this great gift, a relationship with our Creator as our Father. I thought we might take some time this weekend to pray over these paragraphs:

2777 In the Roman liturgy, the Eucharistic assembly is invited to pray to our heavenly Father with filial boldness; the Eastern liturgies develop and use similar expressions: “dare in all confidence,” “make us worthy of… ” From the burning bush Moses heard a voice saying to him, “Do not come near; put off your shoes from your feet, for the place on which you are standing is holy ground.”26 Only Jesus could cross that threshold of the divine holiness, for “when he had made purification for sins,” he brought us into the Father’s presence: “Here am I, and the children God has given me.”27

Our awareness of our status as slaves would make us sink into the ground and our earthly condition would dissolve into dust, if the authority of our Father himself and the Spirit of his Son had not impelled us to this cry . . . ‘Abba, Father!’ . . . When would a mortal dare call God ‘Father,’ if man’s innermost being were not animated by power from on high?”28

2778 This power of the Spirit who introduces us to the Lord’s Prayer is expressed in the liturgies of East and of West by the beautiful, characteristically Christian expression: parrhesia, straightforward simplicity, filial trust, joyous assurance, humble boldness, the certainty of being loved.29

2779 Before we make our own this first exclamation of the Lord’s Prayer, we must humbly cleanse our hearts of certain false images drawn “from this world.” Humility makes us recognize that “no one knows the Son except the Father, and no one knows the Father except the Son and anyone to whom the Son chooses to reveal him,” that is, “to little children.”30 The purification of our hearts has to do with paternal or maternal images, stemming from our personal and cultural history, and influencing our relationship with God. God our Father transcends the categories of the created world. To impose our own ideas in this area “upon him” would be to fabricate idols to adore or pull down. To pray to the Father is to enter into his mystery as he is and as the Son has revealed him to us.

The expression God the Father had never been revealed to anyone. When Moses himself asked God who he was, he heard another name. The Father’s name has been revealed to us in the Son, for the name “Son” implies the new name “Father.”31

2780 We can invoke God as “Father” because he is revealed to us by his Son become man and because his Spirit makes him known to us. The personal relation of the Son to the Father is something that man cannot conceive of nor the angelic powers even dimly see: and yet, the Spirit of the Son grants a participation in that very relation to us who believe that Jesus is the Christ and that we are born of God.32

2781 When we pray to the Father, we are in communion with him and with his Son, Jesus Christ.33 Then we know and recognize him with an ever new sense of wonder. The first phrase of the Our Father is a blessing of adoration before it is a supplication. For it is the glory of God that we should recognize him as “Father,” the true God. We give him thanks for having revealed his name to us, for the gift of believing in it, and for the indwelling of his Presence in us.

2782 We can adore the Father because he has caused us to be reborn to his life by adopting us as his children in his only Son: by Baptism, he incorporates us into the Body of his Christ; through the anointing of his Spirit who flows from the head to the members, he makes us other “Christs.”

God, indeed, who has predestined us to adoption as his sons, has conformed us to the glorious Body of Christ. So, then you who have become sharers in Christ are appropriately called “Christs.”34

The new man, reborn and restored to his God by grace, says first of all, “Father!” because he has now begun to be a son.35

2783 Thus the Lord’s Prayer reveals us to ourselves at the same time that it reveals the Father to us.36
O man, you did not dare to raise your face to heaven, you lowered your eyes to the earth, and suddenly you have received the grace of Christ all your sins have been forgiven. From being a wicked servant you have become a good son…Then raise your eyes to the Father who has begotten you through Baptism, to the Father who has redeemed you through his Son, and say: “Our Father. . . . ” But do not claim any privilege. He is the Father in a special way only of Christ, but he is the common Father of us all, because while he has begotten only Christ, he has created us. Then also say by his grace, “Our Father,” so that you may merit being his son.37

2784 The free gift of adoption requires on our part continual conversion and new life. Praying to our Father should develop in us two fundamental dispositions:
First, the desire to become like him: though created in his image, we are restored to his likeness by grace; and we must respond to this grace.

We must remember . . . and know that when we call God “our Father” we ought to behave as sons of God.38

You cannot call the God of all kindness your Father if you preserve a cruel and inhuman heart; for in this case you no longer have in you the marks of the heavenly Father’s kindness.39

We must contemplate the beauty of the Father without ceasing and adorn our own souls accordingly.40

2785 Second, a humble and trusting heart that enables us “to turn and become like children”:41 for it is to “little children” that the Father is revealed.42
[The prayer is accomplished] by the contemplation of God alone, and by the warmth of love, through which the soul, molded and directed to love him, speaks very familiarly to God as to its own Father with special devotion.43

Our Father: at this name love is aroused in us . . . and the confidence of obtaining what we are about to ask. . . . What would he not give to his children who ask, since he has already granted them the gift of being his children?44


(Use this link to see the text on the Vatican Website – including the numbered references:
https://www.vatican.va/archive/ccc_css/archive/catechism/p4s2a2.htm  )