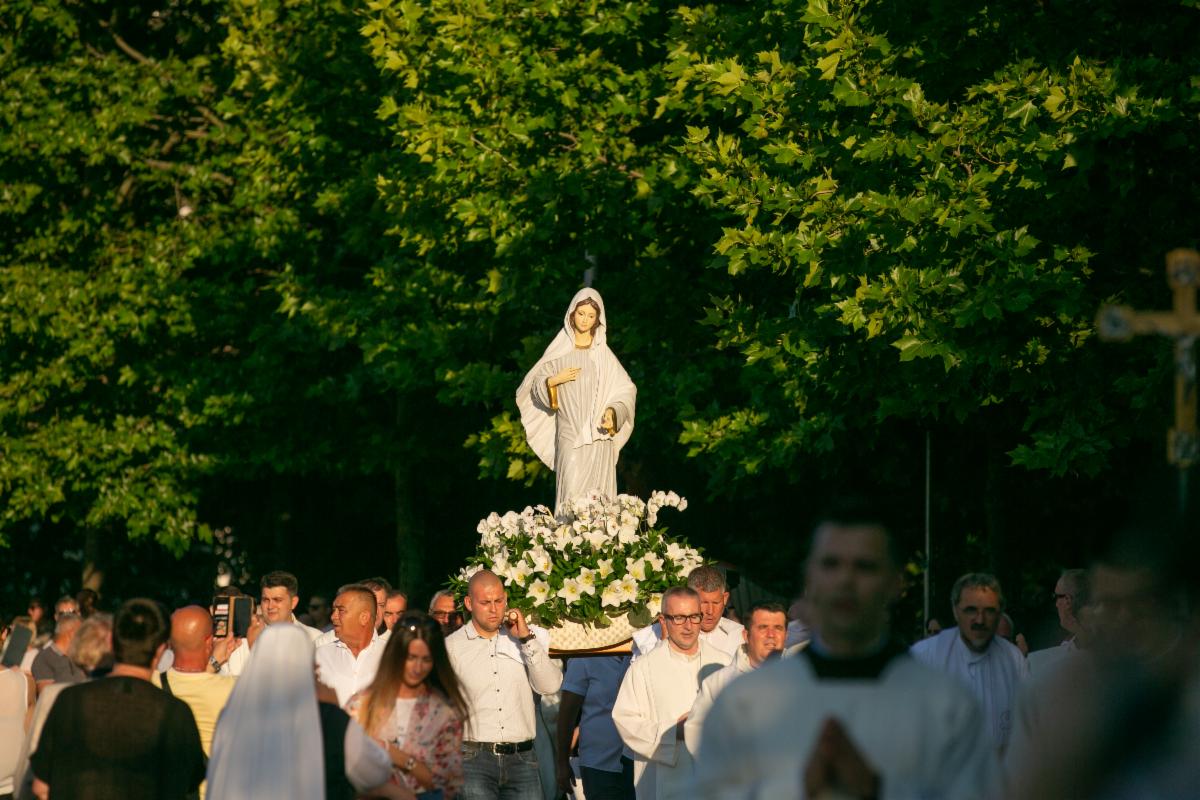 The Procession with Our Lady on the 39th Anniversary in Medjugorje

Dear Children of Our Lady of Medjugorje,

I’ve heard Fr. Ivan Dugandizic’s June 25th homily in Medjugorje referred to as “The homily of the century!” I want to revisit it with you again, so that we won’t forget it.  What Fr. Ivan says about Our Lady, the Woman from the Future, is very important for us to understand.

I’m sharing some of the transcription with you again here – though Cathy shared the 2nd half of the homily in her July 1, 2020 Reflection:

That very beautiful Mass, celebrating the 39th Anniversary of Our Lady’s apparitions, can still be watched at Mary TV:  https://marytv.tv/evening-international-mass-2/     (And note that you can now easily share with anyone all of the videos on Mary TV!)

Excerpt from Fr. Ivan Dugandzic’s Homily for the 39th Anniversary of Our Lady’s coming to Medjugorje.

“Dear brothers and sisters, Mary is the Woman from the future. Because she is the only person, who with her life and with her Assumption into Heaven, has achieved the fullness of Salvation. And according to that, we faithful are just walking in faith and hope towards that fullness of salvation, believing that it will be accomplished for us at the end of time. And since Jesus from the Cross left her to be our Mother and our Intercessor, our destiny has been tied to her and her role in the plan of salvation.

“This is the theological background, and this is the grounding foundation of her frequent apparitions, especially in difficult historical circumstances. When the world’s countries are in a mess, and when even the Church does not have a clear vision of the future, God sends the Woman from Eternity, so she can encourage us. She can show us the way of salvation.

“And just like the Angel once gave to her the word of encouragement, “Do not be afraid, Mary;” in the same way, Our Lady encouraged her surprised and terrified children [the Medjugorje visionaries] that she had chosen as her witnesses. Through them to the world, she gave and is giving a clear message of Peace.

“And now, in this moment it is completely obvious that Peace cannot be guaranteed by state officials and mighty politicians of this world. There is conflict between various ideologies and military alliances, and peace conferences are being held in vain. And there are always new peace accords that are being signed. Peace has been endangered more and more, because people do not speak with their pure heart and sincere intentions. That is why it is in danger….

“So, it happens, that in the desolation of the immorality of this world, from Apparition Hill, the clear stream from Eternity has been released into the desert of the world! Many have recognized and accepted this stream of peace. And that is how Medjugorje gradually with time has become the place of conversion and prayer, the confessional of the whole world. And so, in the meantime, the Church, after a long time and much careful observation and questioning, has recognized and accepted this clear stream of peace.

“A year ago, a reputable representative from the Vatican, Archbishop Fisichella, right from this pulpit, publicly said that there is no better form of New Evangelization that the Church has longed for, for a long time, than what takes place in Medjugorje. It needs to be rooted and planted in every part of the world.

“This has been confirmed to us indirectly in the words of Our Holy Father, Benedict XVI, in his recently published book. When asked by the journalist how does he feel about the spiritual stage of this world today, with great seriousness, after he mentions some concrete moral deviations, he warned that there is more danger in that which is invisible and is being hidden behind the visible moral deviations. And he says literally this: modern society at the moment is in the face of forming an anti-Christian credo; and opposing this credo is punished with social ex-communication. The fear of that mighty power of antichrist is completely natural. And what is necessary is the prayer of the whole Church to resist him.

“Brothers and sisters, all of you who are honoring the Blessed Virgin Mary, Queen of Peace: We are the witnesses of this drama of mankind. The Antichrist, with the help of his many alliances, truly wishes to create man in his own image. That is why he wishes to wipe off the image of God in man; to kill that gene that man has when he as a creature comes from Creator. He wishes to define human nature anew. And he is declaring that what was once evil, now is something which is completely normal and acceptable. And all those who feel differently, they are forbidden. Then in the name of being politically correct and in the name of social tolerance, people represent and defend these evils, since otherwise they would be declared ‘conservative’ and they would be harmful for advancement of society.

“In such a spiritual state of the world, for 39 years, here, right here, the ‘Woman from the Future,’ Queen of Peace, has been showing us the way to true peace and the future with God. She is reminding us permanently that this is the path of holiness, the path to God in the everyday realities of our lives. Our Lady of Medjugorje has been gathering the Church that prays. The Church that with the power of the prayer would successfully resist the opposing force of the antichrist, as Benedict said.

“Let us be sincerely grateful that she considers us and calls us her “Dear Children.” And she wants us to be her witnesses and the apostles in that plan of salvation of the world. Devoted to her, let us be, in joy, open to the future that God is preparing for the Church and for the world. Amen!”

To become a supporter in the work of Mary TV through a donation, click on the “Donate” popup in the upper right hand corner of our home page to find the best way for you to donate to Mary TV. Thank you!!!|