My Son said to you to forgive and to love each other. 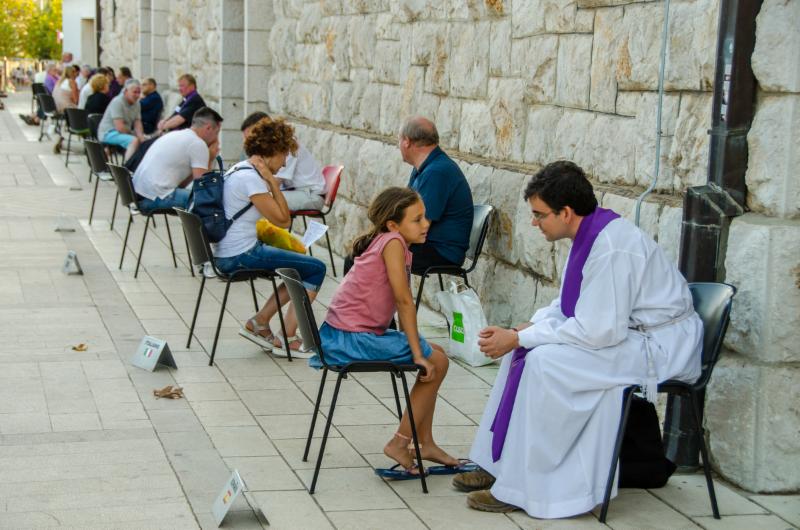 “…My Son said to you to forgive and to love each other. I know that this is not always easy. Suffering makes you grow in spirit. For you to spiritually grow all the more, you must sincerely and truly forgive and love…” (January 2, 2018)

Here is something else that Jesus said to us about forgiveness. It is a long story, but worth pondering very slowly:

Then Peter came up and said to him, “Lord, how often shall my brother sin against me, and I forgive him? As many as seven times?”
Jesus said to him, “I do not say to you seven times, but seventy times seven.”
“Therefore the kingdom of heaven may be compared to a king who wished to settle accounts with his servants. When he began the reckoning, one was brought to him who owed him ten thousand talents; and as he could not pay, his lord ordered him to be sold, with his wife and children and all that he had, and payment to be made. So the servant fell on his knees, imploring him, `Lord, have patience with me, and I will pay you everything.’ And out of pity for him the lord of that servant released him and forgave him the debt.
“But that same servant, as he went out, came upon one of his fellow servant who owed him a hundred denarii; and seizing him by the throat he said, `Pay what you owe.’ So his fellow servant fell down and besought him, `Have patience with me, and I will pay you.’ He refused and went and put him in prison till he should pay the debt.
“When his fellow servants saw what had taken place, they were greatly distressed, and they went and reported to their lord all that had taken place. Then his lord summoned him and said to him, `You wicked servant! I forgave you all that debt because you besought me; and should not you have had mercy on your fellow servant, as I had mercy on you?’ And in anger his lord delivered him to the jailers, till he should pay all his debt.
“So also my heavenly Father will do to every one of you, if you do not forgive your brother from your heart.” (Mt 18: 21-35)

Several things strike me as interesting in this parable from Jesus.

First, the king had many servants who owed him money. Owing the king was not unusual it seems. I think that if we are honest, we have a King to whom we all owe a great deal, more than we can repay. All of us were lost to sin, original and actual, with no hope of repaying our Lord. Not one of us was in the black on that score. We are all debtors to Jesus!

Second, during the reckoning, one servant, who owed a great deal, fell on his knees and asked for mercy. He promised to repay the King, but needed time. Notice how merciful this king was! He forgave the entire debt. Unheard of!! Are we not like that servant when we enter the confessional, admit our debt, and ask for mercy from the Lord? Do we not get it in abundance, more than we could ever hope for?

Third, upon receiving forgiveness of his entire debt, the servant shows no real understanding of what has just happened to him. When he meets a fellow servant who owes him a little bit and asks for mercy, he exacts punishment to the last penny, with no mercy. How could there be such a disconnect? I suspect we are similar when we ask to be forgiven for a sin, and in turn we refuse to forgive our neighbor, judging him and rejecting him. Such disconnect is not unusual.

Fourth, the King discovers this ungrateful behavior, and withdraws his forgiveness. There will be a day when we will have to face the Lord, and explain our own unforgiveness.

I believe it is supposed to be part of the basic fabric of our lives as well. It is not a special gift, but the way that we should relate to one another day in and day out, seventy times seven times a day! Who are we to withhold forgiveness when we have been given so much mercy by our Father in heaven, so much forgiveness through Jesus, our Lord, so much clemency through the Holy Spirit? We live in a Kingdom of love, and love and forgiveness are inseparable.

We must “sincerely and truly forgive and love…”

What a good mother we have!