The Fatherhood of God! 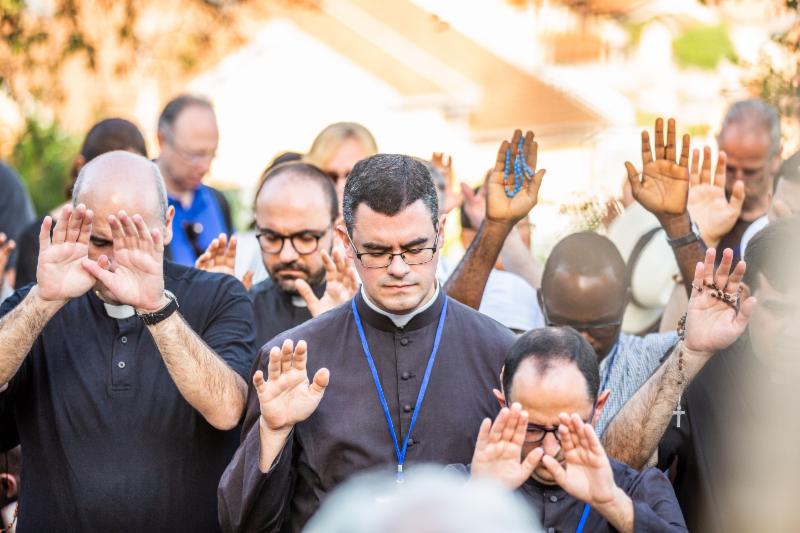 I couldn’t resist transcribing the homily for English Mass on July 10. Fr. Maximilian captured the great struggle we are in, in its essence. I hope you don’t mind, it is very important.

Joseph, the Patriarch, son of Israel (Jacob), is a good type of St. Joseph of Nazareth. There are certain parallels which are obvious. For instance, both men were guided by dreams. Both men went to Egypt. Joseph, the son of Israel, is also a type of Christ. He suffered for his brothers. He was sold as a slave. Betrayed by his own brothers.

If we go to Joseph of Nazareth today, he will, like the Joseph in the Old Testament, open the treasures of his house to you. To all of us! He will introduce you to the Holy Family of Nazareth, to his spouse, Mary, and his child, Jesus. For you can also be a child of God and grow in His likeness. Joseph is there as a father to you and me. And we have to recognize his role. He has an important role. He is very hidden, silent and discreet. He does not impose himself.

And so, he is a beautiful figure, sign, or type of the Heavenly Father, of whom we have a totally wrong idea. And that is because of the terrible wound of original sin which creates ignorance about God. Adam and Eve, instead of running to His embrace, telling Him what they did wrong and asking pardon, they chose to hide. The truth about God must have vanished from their hearts and minds.

To look to Joseph. And so also to look to the Joseph of the Old Testament. Today he did such a beautiful thing. It is actually read tomorrow, but tomorrow we celebrate St. Benedict, the great patriarch and father of monks, and so we don’t hear the reading about Joseph tomorrow, but they go together. Joseph, to his brothers who are speechless as he lets them recognize who he is, he says, “Don’t be dismayed. For God allowed all this to happen.”

First, they threw him into a hole, and then they sold him as a slave. Can you imagine how he looked towards them, his own brothers selling him. How tremendous this was for his heart, how much he suffered. But he said, “God allowed all this to happen and now in this time of famine, our whole family can be saved.”

So, you see, this terrible aggression against him was seen with other eyes, it’s called the eyes of faith. See it from the viewpoint of God. You know God permits everything for our very good. Our intellect is purified if we learn to see good and bad experiences always from the view point of God, with the eyes of faith. Always there is something good. It is beautiful! He could have been rebellious, he (Joseph) could have not recognized them, destroyed them, punished them. No, no. We see the nobility of his heart and soul. He is really one of the great patriarchs. He is an outstanding figure in the Old Testament. And how he now teaches them, because we can ask ourselves, why does he not reveal himself, saying, “Hey, I am Joseph…don’t worry. I will give you…” No, he doesn’t let himself be recognized. And why all this?

He wants to guide them in his wisdom, because he is really a wise patriarch. His wisdom wants to guide them. From egocentrism, to the tenderness of love. From being just a gang or mob, because they are just a gang or mob if they sold their own brother, to a family spirit. From rebellion or pride, to childhood. That is the heart of the matter. From rebellion and pride, to childhood.

And so that suffering that he let them endure (You can read these passages in Genesis, Chapters 37 to 50. The whole story of Joseph is amazing!). That suffering helped them mature internally. Until one of them, Judah, made a most beautiful statement. He finally recognized what mattered. Because Joseph wanted to keep his younger brother with him. Now those twelve sons become the fathers of the Twelve Tribes of Israel. They had different mothers, but one father, Jacob. But different mothers. Now Benjamin and Joseph had the same mother, so Benjamin was his brother totally, not a half-brother but a real brother. So, Joseph wanted to keep him, to see their reaction.

And Judah said, “Now if you keep him, our father at home will die for pain and sorrow.” So, he finally understood what matters. The father, not just himself. Not just I. But the father matters. To pay attention to the father.


You see, today we suffer the last consequences of the destruction of fatherhood.  In the end it is against the Fatherhood of God because we don’t understand it.  Because of a few bad examples we think fathers are like that.  It’s not true.  So, if we don’t know what a father is about, go to Joseph.  The 12 apostles – they were fathers of faith for all of us.  And if today some of them are Judases and betray Jesus – one of the 12 – think today there are thousands, a hundred thousand – how many Judases there might be!  We can’t let all fatherhood be destroyed in the Church.

I know here in Bosnia that they have the most beautiful faith.  Mary came here and said, “There’s still faith.  And therefore, I came.”

I have heard of a new movement (The Seven Sisters Movement) in which seven women make a flower of seven petals.  In the middle they write the name of a priest.  And on the seven petals around there is written seven names, one for each day, Monday, Tuesday, etc. They offer themselves to pray, to go to Mass that day, offer up the Eucharist, pray the Divine Mercy Chaplet and another prayer for their parish priest. With seven petals, they make a flower for him, to protect him. That is most beautiful.

For the priest has received the authority of Christ, but you see they are still humans. They can be weak like Peter, the first Pope. You see what he did, he denied Jesus. So, there are still Peters today, and we can all be Peters sometimes. Let’s always know that through the fatherhood of the Apostles, we reach to the Fatherhood of God.

So, rebellion in the end is always rebellion against God and the devil uses it very well. And those last consequences today, we know it well. It is gender, LGBT, the girls want to be guys, the guys want to be girls. It is a total mess. Total disorder. What have we reached? It is the last outcome of rebellion against God the Father. Why? Because we don’t know His tenderness and love, His goodness. We just fear. And that fear is put into us by the devil and he uses the bad examples of some of the fathers of our times and of all times.

So again, let’s go to Joseph. Let’s ask Joseph to teach us fatherhood. And he, being a father to Jesus…can you imagine? A father to Jesus!! No one ever has been told to be a father to Jesus. You can be His brothers, His sisters, His Mothers, but never His Father. Who has seen Me has seen the Father…But Jesus looks at Joseph and says, “Abba”.   “Daddy”

So what a father Joseph was. But at the same time, he remained a child of God. Joseph, at the same time he remained a child of God. And he knew that he was just an instrument of the Divine Father which in his fatherhood is totally also mother. And we need to recognize in this time that it is God who is Father and Mother to us. The tenderness of a father with the mercy of a mother. He loves us. Then we can come with confidence to him and so enter through the Holy Family of Nazareth, into the Divine Family of God, the Trinitarian life which is the outcome of the new time. And after all this disorder there will be a new time of grace. There will be a new outpouring of the Holy Spirit. The Spirit will renew the face of the earth. But He wants to do that with us and through us. Giving us new knowledge, new wisdom and new love. A new family spirit. And yes, new love for God the Father. Amen
You can listen to Father Maximilian’s homily here:
https://marytv.tv/english-mass-in-medjugorje/
07/10/19 English Mass in Medjugorje

Father’s homily is very deep. I just thought we could read it and then listen to it again, and let his words take root in us.
In Jesus, Mary and Joseph!
Cathy Nolan
©Mary TV 2019
PrevPrevious
NextNext
Current Conditions