The Tent of Meeting! 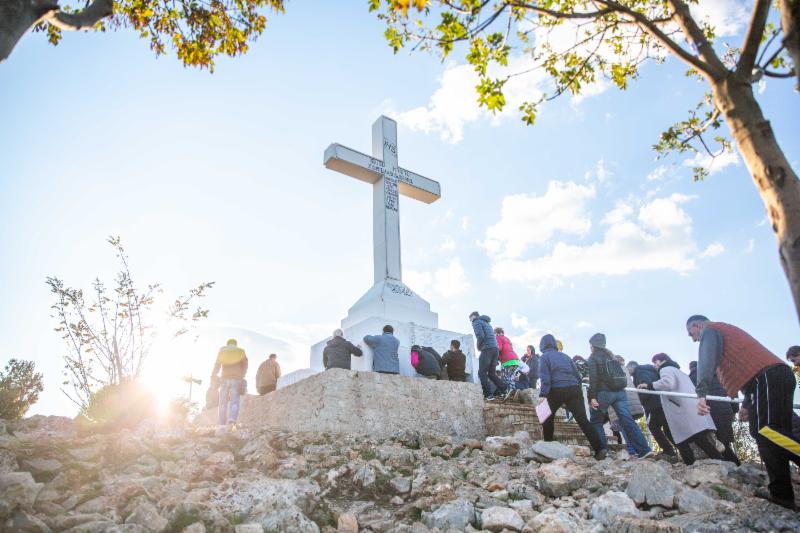 Yesterday, the first reading at Holy Mass was from Exodus 33 and 34, about Moses meeting with the Lord in the Tent of Meeting which was pitched outside of the camp. The Israelites had sinned and so the Lord no longer would come into their midst but would appear to Moses in the Tent outside of the camp. This was a significant change in God’s relationship to His people. Fr. John Kane gave a beautiful homily on this reading from Exodus, that I have transcribed. I think it will be a blessing for us all. You can also go to our English Mass Archives to listen to the homily yourselves, July 30, 2019.

Here is the transcribed homily of Fr. John Kane, given in Medjugorje at English Mass on July 30, 2019:
I was listening to the first reading and I suppose there was an element of sadness thinking perhaps why was it that the Tent of meeting was outside the camp? That Moses had to leave the people of Israel, God’s chosen ones ultimately, and yet to come out in order to speak to the Lord while all the people would stand or bow down at the entrance of their homes. And they would have to wait then for Moses to come back. He was like that mediator between God and His people.

You remember the Golden Calf? Remember that story? Moses was up the mountain with the Lord and the Ten Commandments were being offered. And he was coming down off the mountain and he saw the apostasy. The people had returned to their pagan practices from Egypt. So quickly. So easily they fell back into their idolatry. And there was the Golden Calf before them all.

Immediately, what happens when we turn from God. We separate ourselves from His blessing, from His grace, from His presence, from His Tent. And so there must be this separation between God and us. And that is ultimately what happened in the desert with God’s chosen people. And what ultimately happened is that God had to make a concessionary plan where he would have to compromise with that original plan that He desired. And I think that is what God has done right throughout our salvation history. He has compromised with us. He has put up with us, because maybe He knows that we are all tainted by original sin.

We are incapable of true worship by our own means. That there is a need for someone to intercede on our behalf to make up for all that is lacking within us. How wonderful the mercy of God is! How wonderful God is that even though we are all sinners that God would make up for it all. I’m just thinking of the first time I came here, oh a long time ago.

How separated I really was from the Lord. I had no interest or desire to pray. I did everything instead of turning up here for Mass. All my intentions were self-centered. It was all about me. I thought I had it all figured out. I was looking at all of you guys and thinking, “Oh they haven’t got a clue.” Isn’t it terrible how we can be so critical?

And yet, God is so good. So merciful! It is as if He knew ahead. He could see ahead of all that pride and selfishness and ego, and He said, “Don’t worry, John, you will come to me eventually. I will break into your heart. I will reveal myself in the midst of your pain and suffering, in the midst of your ego-centered, self-centered way. Because I have a plan for you. A plan for peace and prosperity as our Scripture reminds us.

And He did, He brought me up that mountain. I don’t know how I ended up there. And Vicka was having an apparition. It was earlier on, it wouldn’t be a frequent now. And I saw this girl go into her ecstasy. And I actually didn’t know what was happening at that moment. I had to ask the tour guide what was going on. He said, “Our Lady is here.” I think I turned to him and said, “Who?”

So, for 10 minutes or so I had to witness this phenomenon of an apparition. This miracle of God, in which He would break into our existence. To reveal His Blessed Mother and the True God who is for us. And you know I came down that mountain and all I recall that in my heart all I felt was that I wanted to go home. I wanted to go home and tell my mother that my brother was ok. Because my brother had died, you see, six months previous through cancer.

So, there was a great pain inside me, a great grief. Suffering and unanswered questions. It was all so painful. It was deep and I was trying to hide it, maybe. I couldn’t hide my joy coming down that mountain. A joy that has never left me in 25 years, maybe.

And that’s the gift of God. You see, the truth of God is this, that God loves me first. God loves all of us first. He takes the initiative. Otherwise we would have no need of Him.

Grace is primary. Without it we would not exist. And so, God in His mercy touched my broken, wounded heart. Just as Moses interceded and heard the cry of his people, that’s what happens for all of us. Cry out to God. He is only waiting, waiting to break in and do something for us.

And you know, he did it for the people. Ultimately His plan would be fulfilled, even with all the compromises through history. Because He sent Jesus to make up for everything. You see, Jesus became the tent of meeting. He is the Temple. And He entered and came among us. It is like He returned to the camp. Because He sat with the sinners. He came to the tax collectors, the sinners, the poor, the lame, the weak. You see, that is what we are. We are all broken and wounded and sinful.

And God knowing that by ourselves we were incapable, He went through it all and He entered. “The Word became flesh and He dwelt among us.”

And so here we are today in 2019 in Medjugorje, invited to enter the Temple. To enter the Kingdom of God that is among us. And here is the plan of God today.   Because we are all called to become priests. We are all called to imitate Him who is the High Priest. The One who entered the Temple and brought the ultimate sacrifice of Himself. And the great mystery of Church, and that is what we are, God’s body…we are called to share in that prayer, that sacrifice, that offering.

Can you see the Mystery that we are all invited to? Called to? Created for? It’s called holiness. Jesus said, “Be holy. Be perfect as your Heavenly Father is perfect.” But it is not now by our own strength, as we might think (as young Fr. John taught all those years ago). But it is when we learn to surrender our lives to the ultimate strength and rely on God. To humble ourselves before His power and mercy, and say, “Save me, I am a sinner. I need your forgiveness.”

Even this morning I was looking for a priest. Isn’t that incredible! To know one’s need for God is the great key that opens the door to that life that God wants for us. The Spirit that He wants to pour into our hearts. But if there is sin, if there is an obstacle to that grace, then we are incapable. We will remain outside the Tent. That separation between us and God remains.

Let’s not let these days go to waste. Let’s strive to encounter that mercy. Maybe we have to go to the mountain first to meet our brokenness. To become weak, so that we will run back down again and cue up for that confession again, and find that priest, and ultimately experience the free gift of God’s mercy. Who only desires to embrace us. Amen.
(Homily for English Mass, Medjugorje, July 30,2019 – Fr. John Kane)