Blessed is She who believed… 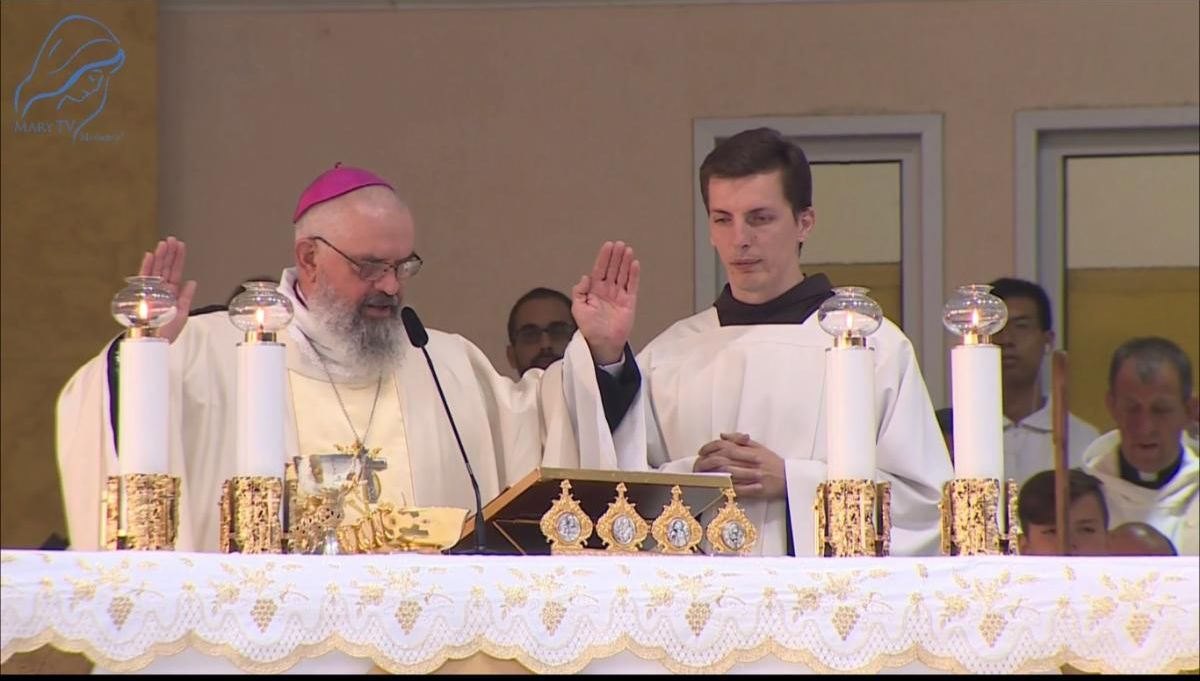 Archbishop Jean Pierre Cattenoz, from Avignon, France, presided at Holy Mass and gave the homily for the Solemnity of the Assumption during the Evening Program in Medjugorje yesterday!! It was a beautiful Holy Mass!! His homily was so precious that I wanted very much to transcribe it for you. Here it is! (Remember it was spoken in French, translated into Croatian and then in to English. )

Homily from the Evening Program, Solemnity of the Assumption of the Blessed Virgin Mary, Archbishop Jeanne Pierre Cattenoz, Presiding:

When I woke up this morning, I asked myself, “How did the Holy Trinity receive or accept the Blessed Virgin Mary?” The Father was definitely filled with joy! The Father who received His first “adopted child” in His beloved Son.

The Holy Spirit, from His side, was so happy, because His love was overflowing. Overjoyed before the one who in fullness had entered into the mystery of love between Christ and His Church.

And Jesus from His side, how did He receive and accept His Mother? Simply He said to her, “Good afternoon, Mom!” Yet He had eyes filled with tears. And they fell into each other’s embrace. And when Mary embraced her Son, [hugging] Him, she could sense the whole mystery of the Church, the Body of Christ. The mystery of this Solemnity of the Assumption tells us that we are all called to direct our eyes towards heaven.

At the same time, the liturgy today offers us the Gospel of the Visitation of Our Lady to her cousin, Elizabeth. When Mary entered into the embrace of the Holy Trinity, she continued her mission and in the Gospel that we just read, the first thing that Mary did, (although sometimes the translations are not so good) the Gospel says that she stood up! In the Gospel the verb that is used describes the resurrection! Mary was already in the haste that her love brings her to, to visit in haste her cousin Elizabeth.

And when she enters the house something unheard of happens. As soon as Elizabeth heard Mary’s greeting, immediately the child leapt for joy in her womb. Do not ask me how he did that. What I am thinking about is a long time ago what David did before the Ark of the Covenant. He also leaped and was dancing around. That is how the fetus -John the Baptist – also recognized in Mary the new Ark of the Covenant. She is the one who carries the one who carries the entire universe. And immediately after that, Elizabeth was filled with the Holy Spirit. It is already the outpouring of the Holy Spirit. The Holy Spirit was given to her and she was truly filled with the Holy Spirit. And as always, when the Holy Spirit comes into someone, that soul proclaims the greatness of the Lord.
And after she proclaimed the greatness of the Lord, she asked one question. “How was it given to me that the Mother of my Lord should come to me?” In reality, the answer is very simple. It is enough to go to the foot of the Cross. At the foot of the Cross we will discover Jesus’ mother, and the beloved disciple. And on the Cross with His last efforts, Jesus turned towards his Mother, and in her He saw the New Eve. And He shows to her the beloved disciple, and He shows all of us to her as well, because we are all beloved disciples of Jesus. And when He said to his Mother, “Behold your son”, Jesus’ mother received a new Motherhood. And we all are her children.

So, it is not strange that our Mother comes to take care of us. And here in Medjugorje she truly desires to show what is the place of the mother with her children. And if you know well the Gospel of John, you will remember that the evangelist wrote: “From that moment the disciple took Jesus’ mother to himself.” That is from the Gospel translated from the Greek. In the Aramaic Gospel, there is another version. It tells us this; “From that moment on, the Mother of Jesus took him with her.” We truly enter into Mary’s house. She truly becomes Mother of all of us.

And Elizabeth once again, reminds us that as soon as Mary’s greeting reached her ear, the infant leaped in her womb. When today I see how many abortions are in the world on an annual basis, I ask myself, “How can it be affirmed that fetus and embryo are not human beings?” Because in the chapter that we just read, we have a fetus and an embryo who are mutually in dialogue, communicating. And that shows us that according to the words of one writer, from the mother’s womb until the grave we are truly persons. And truly we must pray for all those children who are not born every year.
And that we may come to the end of this chapter on the Visitation, we will not go on to the Magnificat prayer, because otherwise this homily would last an additional hour. Here we find one beatitude. Can you tell me which beatitude it is? “Blessed is the one who believed that was spoken to her by the Lord would be fulfilled.” Elizabeth invites us to grow in our life with Christ, believing in Him.

And to finish this, in that beatitude there is one beautiful pearl. “Blessed is the one who believed what was spoken to her would be fulfilled.” By the Holy Spirit Elizabeth discovered the connection that exists between ‘to say’ and ‘to do’ with God. And the Blessed Virgin Mary understood that so well. Because at the end of the Annunciation in the conversation with the Angel she said, “May it be to me according to thy word.” And in Cana she said to the servants, “Do all that He tells you.” And that tells you how important it is to receive God’s word, so that it can be incarnated and live in each one of us. That is when each of us will be blessed, because the Word will then be incarnated in us and we will be transfigured in Christ. With Mary our Mother, amen.

What a beautiful homily for us on the Assumption!! We are so blessed!!