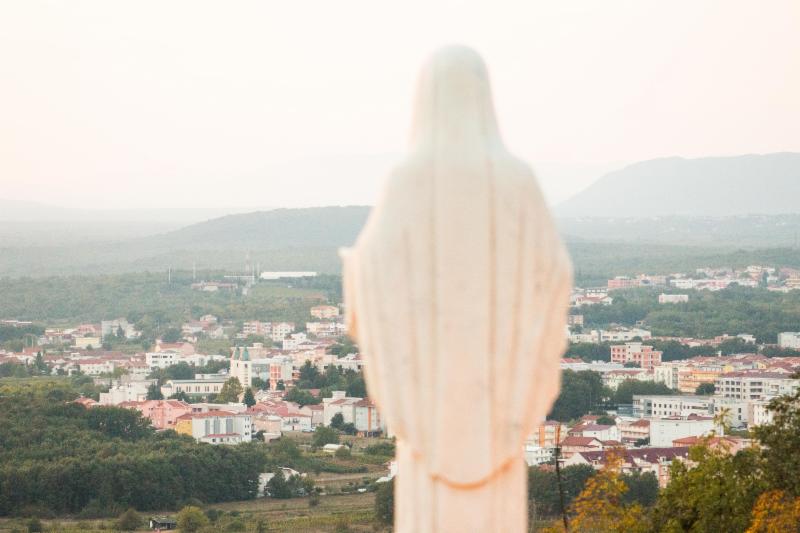 “Dear children! This is a time of grace. Little children, pray more, speak less and permit God to lead you on the way of conversion. I am with you and love you with my motherly love. Thank you for having responded to my call.”

Yesterday, Fr. Peter Dugandzic gave a wonderful homily at the English Mass in Medjugorje. I have transcribed it for you. Here is the first half, the second half will be tomorrow. Fr. Peter gave us some very good guidance on how the Lord wants to lead us in these very difficult days. His advice is straight from Jesus and Mary. Here is part 1:

My name is Fr. Peter Dugandzic, and as the sound of that name suggests, I am of Croatian descent. It was 32 years ago this very week that I first came here. I actually beat Fr. Leon! Thirty-two years ago this week, the course of my life changed. And I want you to just keep that in mind as I offer this reflection this morning, for there are a few things that I would like to say that I think are intimately linked to what Our Lady has tried to accomplish all these years.
What would be the one thing that would probably throw you into the greatest panic if you saw the leader of your country, whether it would be a president or a prime minister, come on television and say the words, “We are at war!” You would fear for the young men, you would fear for the young women, you would fear for your own lives, not knowing what it would bring for the future. To hear a leader make that statement is very frightening. Very scary if you ask me.

This is one of those things that from time to time we have to reflect upon, because the world is always in a precarious position. And to hear those words, knowing what is going on in the world, would be utterly disastrous. Especially after what we saw last century. We saw horrific things happen. When you reflect upon all the deaths from the First World War, from the Second World War, and you reflect on the deaths that happened from the war in this country, or the war that happened in Africa, when you reflect on the pain and the agony that came with it, it’s frightening. It’s horrific. And it should bother us.

But I say those words to you today as a leader. My dear brothers and sisters, we are at war! We are enlisted in the army of Christ. And we are at war.

“To be made firm!” In the old rite, the young person would get a slap in the face. The good old days when we could do that. Now forget about it. They would get a little smack in the face with the Bishop indicating to them that “now you are in the army of Christ, and you should expect to be persecuted.” You should expect to engage in the battle. And when you engage in that battle, they will rage against you. Sometimes to the point of a physical attack.

I love celebrating this feast of St. John the Baptist. Because this is a reminder to you and to me of just how the devil works. We are at war against the devil. And there was John the Baptist, this seemingly innocent human being who only spoke the truth. Who only stood in the midst of the people and said to them, “This is the will of God.” And for it he lost his head.

It can be disturbing sometimes when people speak the truth to us. It can be disturbing to hear the truth because the truth, as we hear from St. Augustine, is a beauty but it is also a burden. The truth is a huge burden. So when we are enmeshed in the truth, and when we speak the truth (now I am not talking about facts alone but truth) the world will rebel. And they all rebelled against John the Baptist.
Now think about it for a second. Did John the Baptist have his military training in the army of Christ? He did. He was out in the desert. There is a lot of evidence that he was part of the Essene community. Living out in the wilderness for years. Jesus went out in the wilderness for years. That prepares us for the battle. That prepares you and prepares me for the battle.
To willingly take on penance, as Father said yesterday. To willingly engage in the word that most of us have forgotten. Mortification. To mortify. To put our passions to death. Every sin I have ever committed in my life was because of inherent passion. And if I don’t put those passions to death, the world will win. The world will win.
Instead we have to mortify those passions, doing acts of penance. And it is different for every person. While Our Lady has said again and again, whether it be at Fatima, at Kibeho, here in Medjugorje, what is one of the things she has brought up again and again? Fasting. Penance.
In the apparitions in Fatima, the word penance was repeated three times by the angel. Penance. Penance. Penance. For those of us who engage in the battle the way Sr. Lucia did, the way Jacinta and Francisco did, the way all of the holy people throughout all of history did, was through penance and mortification. Offering ourselves as Christ offered himself for the salvation of souls. How many stories I have heard in my years of someone offering themselves for someone else who was lost. How someone like St. Monica did for St. Augustine.

PS. Thanks again for choosing to support Mary TV!! Wow, it’s a miracle!!!