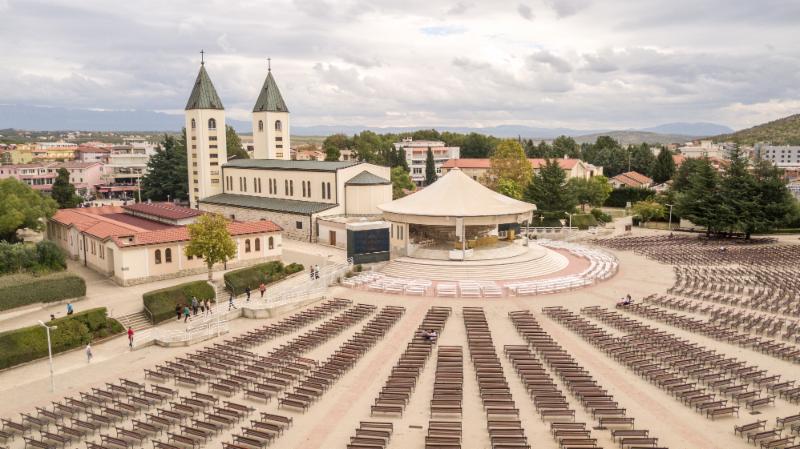 Often Fr. Leon will give a little talk before English Mass, which we call a “Sanctuary Snippet!” (You can listen to all the Snippets here:  https://marytv.tv/sanctuary-snippets-2/  ) He does short teachings that help us in our spiritual life.  The Snippet for yesterday, October 9, was so helpful!  He answered several objections to Medjugorje as an apparition site.  We all encounter people who are cautious or even afraid of Medjugorje.  Fr. Leon’s points will help us to allay their fears.  Medjugorje is a grace for our time!

In the name of the Father and of the Son and of the Holy Spirit, Amen.

Today I thought I would talk to you about possible objections to Medjugorje.  Some of the objections that people come up with (these are the sort of things you hear or have already heard, or maybe you have these objections yourself…):

One of the things people say is that you cannot go to an unapproved apparition site. You cannot go to an unapproved apparitions site.  Well, what happened at Lourdes.  Lourdes took four years to be approved, Fatima took fifteen years to be approved.  When they were approved the bishops said that one of the reasons they were approved was the continual numbers of people who were coming there while it was still not approved.  So that is one of the signs that the Church looks for.  So to say that you cannot go to a place that is not approved yet is not true.

Then they say that the approval is too slow in coming.  Champion in Wisconsin to 151 years to be approved, Laus in France took 344 years.  So the average number of years for Marian Apparitions Sites for approval is 64.8 years.  Here in Medjugorje we are near 37 years, so we have another 27.8 years to go before we are average.

Then  people say there is a danger in going to a place like Medjugorje.  This is true.  According to Archbishop Leonard of Brussels.  He said there are two dangers in going to Medjugorje.

Number 2.  Then he says there is a greater danger to Medjugorje.  This is the danger of “What if it is true?”  Because then it is a grace from God, and how have we responded to it?  So that is the greater danger!

Then people say, “Oh the visionaries lives.  If I had seen the Mother of God, I would have become a monk or nun or something.”  Then you have to ask yourselves, why haven’t I become a monk or nun, its not too late!  I have a habit in your size.  Now this a I call, Vauzou syndrome.  I name it after the novice mistress of St. Bernadette.  Sr. Vauzou said, “Why would the Mother of God appear to an illiterate, uneducated sister?  She should have appeared to a marvelous, fantastic, clever person like me.”

Now think about La Salette.  In La Salette, which is an approved apparition, the two visionaries were hounded by the public and they both went off the rails.  Melanie, the girl, joined four different orders and she died outside all of them, dispensed from her vows.  Maximin, the boy, was thrown out of high school.  Then thrown out of medical school, then tried to be a soldier and failed at that. Tried to train as a pharmacist, and later lent his name to a man who made liquor, and they called it “Visionary Liquor”.  He was swindled out of a lot of money.  Then he died, penniless, alcoholic and in a ditch, alone. But he was a real visionary.  So don’t confuse being a visionary with being a saint.  This is a good reason why we should leave them alone and not hound them.

People say Our Lady doesn’t make appointments to appear, because here she appears at 5:40 every day.  What did she do in history, well we know at Guadalupe she said to come back tomorrow, same time and same place.  Fatima, come back every 13th of the month, same time, same place.  Lourdes: “Will you do me the great grace of coming here every day for 15 days.” So from this we see that Mary is perfectly capable of making appointments.

And finally, people complain that it is the same message, over and over.  This is submit to all the mothers here.  You know if you repeat yourself, obviously you must be fake. So to all the mothers here, how many times do you tell your children to come down to dinner?   How many times do you tell them to clean their rooms?  Just once? Because if you repeat yourself you must be fake.

Ok, if Our Lady has to repeat herself it means that we are bad children!

June 25, 2007 “Dear children! Also today, with great joy in my heart, I call you to conversion. Little children, do not forget that you are all important in this great plan, which God leads through Medjugorje. God desires to convert the entire world and to call it to salvation and to the way towards Himself, who is the beginning and the end of every being. In a special way, little children, from the depth of my heart, I call you all to open yourselves to this great grace that God gives you through my presence here. I desire to thank each of you for the sacrifices and prayers. I am with you and I bless you all. Thank you for having responded to my call.”