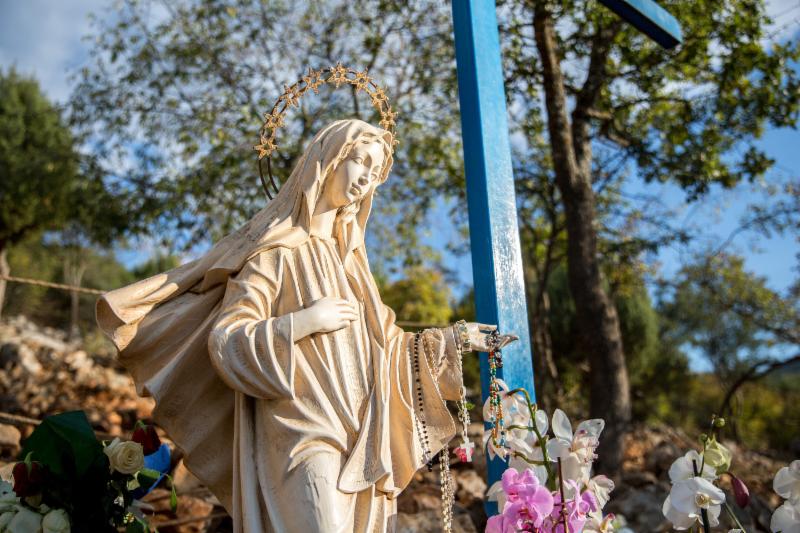 “My children, listen to me…”
(c)Anthony Zubac

“…My children, listen to me so that good may overcome, so that you may come to know the love of my Son. This is the greatest happiness – the hands of my Son that embrace, of Him who loves the soul, of Him who has given Himself for you and is always giving Himself anew in the Eucharist, of Him who has the words of eternal life…” (0ctober 2, 2018)

“My children, listen to me so that good may overcome…”

“I have said this to you, that in me you may have peace. In the world you have tribulation; but be of good cheer, I have overcome the world.” (John 16:33)

For this reason I bow my knees before the Father, from whom every family in heaven and on earth is named, that according to the riches of his glory he may grant you to be strengthened with might through his Spirit in the inner man, and that Christ may dwell in your hearts through faith; that you, being rooted and grounded in love, may have power to comprehend with all the saints what is the breadth and length and height and depth, and to know the love of Christ which surpasses knowledge, that you may be filled with all the fullness of God. (Eph 3: 14-19)

And they were bringing children to him, that he might touch them; and the disciples rebuked them. But when Jesus saw it he was indignant, and said to them, “Let the children come to me, do not hinder them; for to such belongs the kingdom of God. Truly, I say to you, whoever does not receive the kingdom of God like a child shall not enter it.” And he took them in his arms and blessed them, laying his hands upon them. (Mark 10:13-16)

“…the hands of my Son that embrace…”

The LORD is my shepherd, I shall not want;
he makes me lie down in green pastures.
He leads me beside still waters;
he restores my soul.
He leads me in paths of righteousness
for his name’s sake.
Even though I walk through the valley of the shadow of death,
I fear no evil;
for thou art with me;
thy rod and thy staff,
they comfort me.
Thou preparest a table before me
in the presence of my enemies;
thou anointest my head with oil,
my cup overflows.
Surely goodness and mercy shall follow me
all the days of my life;
and I shall dwell in the house of the LORD
forever. (Psalm 23)

“…of Him who has given Himself for you and is always giving Himself anew in the Eucharist,”

“And he took bread, and when he had given thanks he broke it and gave it to them, saying, “This is my body which is given for you. Do this in remembrance of me.” And likewise the cup after supper, saying, “This cup which is poured out for you is the new covenant in my blood. (Luke 22: 19-20)

“…of Him who has the words of eternal life…”

“Jesus said to the twelve, “Do you also wish to go away?” Simon Peter answered him, “Lord, to whom shall we go? You have the words of eternal life; and we have believed, and have come to know, that you are the Holy One of God.” (John 6: 67-69)

A Wealth of Spirituality
Scroll to top