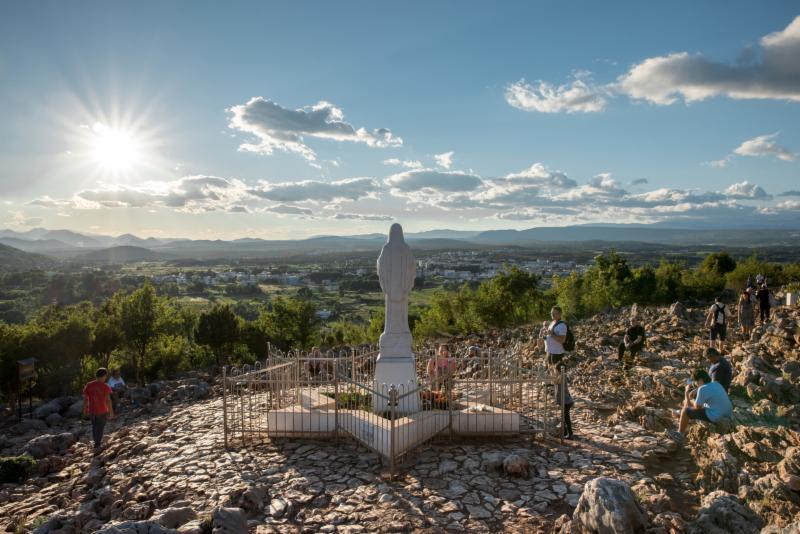 Our Lady came to Medjugorje in 1981, early in the pontificate of St. John Paul II. She continued to appear for the rest of his life. It has always seemed to me that she was sent to us at that time, to be a strength for the Holy Father, and to bring graces for the Church, so very much needed at that time. She spoke to St. John Paul II a couple of times through the visionaries. Here are two such messages that she gave to him in particular:

“Have him consider himself the father of all mankind, and not only of Christians. Have him spread untiringly and with courage the message of peace and love among all mankind.”

“Pray, pray, pray! Do not be discouraged. Be in peace because God gives you the grace to defeat satan.”

“In my messages, I recommend to everyone, and to the Holy Father in particular, to spread the message which I have received from my Son here at Medjugorje. I wish to entrust to the Pope, the word with which I came here: ‘MIR’, (peace in Croatian), which he must spread everywhere. And here is a message which is especially for him: That he bring together the Christian people, through his words and his preaching; that he spread particularly among the young people, the messages which he has received from the Father in his prayers, when God inspires him.”

You can see that Our Lady was encouraging St. John Paul II to spread the message of peace to the people of the whole world. She herself was doing the very same thing. This was the Father’s desire. And they both responded to it.

Late in his life and pontificate, St. John Paul II wrote an Apostolic Letter “On the Rosary”. It is a powerful letter, short and rich in teaching. I find it important to reread it often, so as to refresh the good teaching found in it. Pope John Paul loved the Rosary. He prayed it with great faith and joy. Here is what he said about the Rosary as a powerful weapon for peace:

40. The grave challenges confronting the world at the start of this new Millennium lead us to think that only an intervention from on high, capable of guiding the hearts of those living in situations of conflict and those governing the destinies of nations, can give reason to hope for a brighter future.

The Rosary is by its nature a prayer for peace, since it consists in the contemplation of Christ, the Prince of Peace, the one who is “our peace” (Eph 2:14). Anyone who assimilates the mystery of Christ – and this is clearly the goal of the Rosary – learns the secret of peace and makes it his life’s project. Moreover, by virtue of its meditative character, with the tranquil succession of Hail Marys, the Rosary has a peaceful effect on those who pray it, disposing them to receive and experience in their innermost depths, and to spread around them, that true peace which is the special gift of the Risen Lord (cf. Jn 14:27; 20.21).

The Rosary is also a prayer for peace because of the fruits of charity which it produces. When prayed well in a truly meditative way, the Rosary leads to an encounter with Christ in his mysteries and so cannot fail to draw attention to the face of Christ in others, especially in the most afflicted. How could one possibly contemplate the mystery of the Child of Bethlehem, in the joyful mysteries, without experiencing the desire to welcome, defend and promote life, and to shoulder the burdens of suffering children all over the world? How could one possibly follow in the footsteps of Christ the Revealer, in the mysteries of light, without resolving to bear witness to his “Beatitudes” in daily life? And how could one contemplate Christ carrying the Cross and Christ Crucified, without feeling the need to act as a “Simon of Cyrene” for our brothers and sisters weighed down by grief or crushed by despair? Finally, how could one possibly gaze upon the glory of the Risen Christ or of Mary Queen of Heaven, without yearning to make this world more beautiful, more just, more closely conformed to God’s plan?

In a word, by focusing our eyes on Christ, the Rosary also makes us peacemakers in the world. By its nature as an insistent choral petition in harmony with Christ’s invitation to “pray ceaselessly” (Lk 18:1), the Rosary allows us to hope that, even today, the difficult “battle” for peace can be won. Far from offering an escape from the problems of the world, the Rosary obliges us to see them with responsible and generous eyes, and obtains for us the strength to face them with the certainty of God’s help and the firm intention of bearing witness in every situation to “love, which binds everything together in perfect harmony” (Col 3:14).
https://w2.vatican.va/content/john-paul-ii/en/apost_letters/2002/documents/hf_jp-ii_apl_20021016_rosarium-virginis-mariae.html

May we continue to pray the Rosary as St. John Paul II taught us, with attention, meditation, love and deep faith.

I find it deeply moving that St. John Paul would say: “The grave challenges confronting the world at the start of this new Millennium lead us to think that only an intervention from on high, capable of guiding the hearts of those living in situations of conflict and those governing the destinies of nations, can give reason to hope for a brighter future.” Now we understand what he saw. This is indeed a time when we need God to intervene. Perhaps it is our Lady of Medjugorje who is that intervention.

We have been given the tool to stop the enemy, and to help establish peace in the world. Now is the time to double down and pray the Rosary with all our hearts! We may also be part of that heavenly intervention!!

Oh Jesus, I surrender myself to you! You take care of it!
Scroll to top