Pray for your priests! 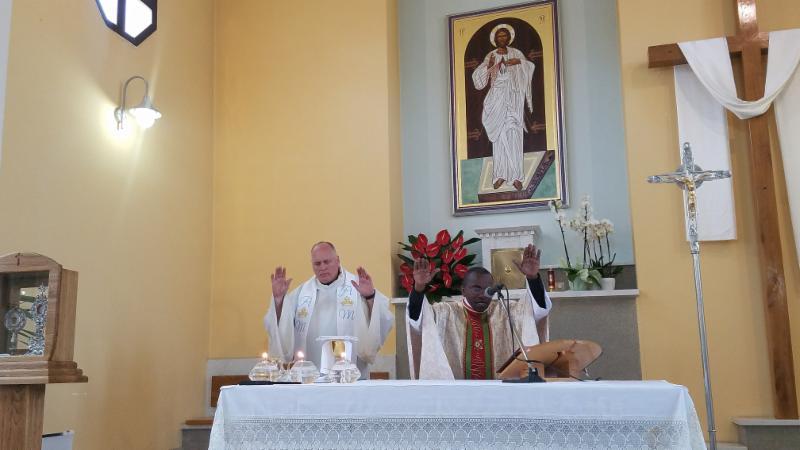 Today I want to share a wonderful homily given by Fr. Alwyn Furtado, CSSp., (not pictured above!) in Medjugorje at the English Mass, April 14, 2018. Fr. Furtadp shares so much wisdom, the kind of wisdom that comes from many years as a priest. He has lived the messages of Medjugorje for many years, as you will see. And His words will help us navigate the days ahead.
Fr. Alwyn Furtado, English Mass, April 14, 2018:

I did not introduce myself at the beginning of Mass, so I just want to tell you that my name is Fr. Al Furtado, although I have been called worse things than that! I owe my vocation really, or I should say the training for my vocation to the Irish missionaries. I studied in Ireland and was ordained in Dublin. I am a Holy Ghost Father. I worked for 22 years in the missions in East Africa.

Now we are no longer called Holy Ghost Fathers because after Vatican II we gave up the Ghost and are now called “Holy Spirit Fathers”, or “Spiritans”.

My message to you today is firstly, prayer for priests. In so many of her messages Our Blessed Mother has asked to pray for priests. And you know, somebody said to me once, “Why do priests need prayer? There they are on the altar, celebrating Eucharist, the Sacraments and all. Do they really need to be prayed for?”

I answered, “Well look at the words of St. Paul. ‘Taken from among men to the things that pertain to God. And he prays for the people, but also for his own sins.'” Priests face many, many trials and crosses. Just about six years ago I was in East Africa. I was there for Ash Wednesday. Actually I had worked there for many years. And this priest, a secular priest, who worked in the Cathedral there, and I were distributing ashes. I got back to California, because I now live there, on the first Sunday of Lent, which was about four days later, and I got word that this priest was getting out of his car to visit one of our mission stations that was way out of town, and as he was getting out of his car, he was shot three times in the head. As you know, East Africa, Mombasa, Zanzibar, is every Islamic. But it is not the local people, who are very friendly. In the Catholic school there, about 75 % of the children enrolled are Muslim. About two years later another priest who was walking in the marketplace, had acid thrown on his face. So you see that today, even in missionary endeavors, priests have to face so many tribulations in order to give witness, or one might say in order to accept the great command which was given by Christ, that you heard on the Sunday after Easter, “Go and teach all nations.”

So priests, not only missionary priests, but all priests face many, many tribulations today. And so you need to keep them in your prayers in answer to Our Blessed Mother, in so many of her messages.

My second message to you would be, well I just finished reading the book “My Heart Will Triumph” by Mirjana. I just finished the book actually. And what amazed me was when she met Our Holy Father, St. John Paul II, he said to her in the private audience that she had with him, in answer to her, “Go and take care of Medjugorje. I would go to Medjugorje if I was not Pope.”

Now we think that the Pope can do anything. No he cannot. He is caught up in the protocol of the Vatican. And so his hands are really tied. Even Pope Francis today would like to do a lot of things the best way he can, but he has to follow protocol.

Now I know that many of you will be buying Rosaries, and articles that we will bless after every Mass. You will be taking them home with you to your friends. I wonder how many of these friends will use them? The may take the Rosaries and put them in a drawer. Leave them there. But you could do something more to make that hope a reality. And you may say, how can we do that? Answering the call of Medjugorje in your life.

When you are here you receive special graces and blessings from the Blessed Mother. When you go back after a week, after a month you will really strive to do all the things, the promises you make. I would advise you here to write them down, what you are going to do.

So when you go back, and you have these Rosaries, invite one or two of your friends, invite them some time during the week and say the Rosary together. Then have a cup of tea or something and make it a sort of a prayer meeting. We started one of these and 28 years later in California, in the archdiocese, it is still going on. And the prayer group has grown quite a bit, quite a few families. And it has helped the children too, to have the spirit of prayer.

But we may wonder when are we going to read the Bible? First of all, get a Bible! Put it in a place, maybe on the dining room table, or in the sitting room where it is evident to all. There is a story told of a priest who was invited to dinner and he went to the house. And the husband left a note on the table, “Mary, don’t forget to dust the Bible for the Pater is coming to dinner.” And the priest saw the note. So there you are.

You know it is so very important. Keep it and read it. It is important. Especially the life of Christ. The letters of St. Paul. Now you might find the Old Testament very hard to understand. But there we have the actual words of Jesus.

And the other thing we can to is to reach out to people. And have prayer in the family. I was in Dublin last year, and as you know they were preparing for a visit from Pope Francis, who is coming to Ireland. And one of the things will be an emphasis on the family. Well I know it is very hard today, but have prayer in the family. It brings that spirit of unity. So often we hear the injunction of Fr. Peyton, “The family that prays together, stays together.” So why do we have this great disruption, the breakdown of the nuclear family? That is because of the lack of prayer.

But even in society, the family is the nucleus of society. Those of you who are from Ireland are praying for this 8th Amendment. But many of you ten years ago would have said this would be impossible to happen in Ireland. But it did not happen overnight. It happened because we stopped praying. The family stopped praying. The children grew up without knowing the prayers. They grew up in an environment that was so secular. And so when secularization comes into our society, it becomes harder and harder to live the message of Christianity. And especially to live the message of Mary.

So my brothers and sisters, these two messages today, pray for your priest, and secondly, make that hope, make that realization that Medjugorje is the hope of the entire world, bring it into realization by responding to what Our Blessed Mother has requested.

And my Mass this morning is offered for your intentions, as we pray together to the Blessed Mother, for yourselves, for your families, and as you pray for healing of soul and body, and there we have it in the Eucharist itself. So let us pray for a greater devotion to the Eucharist because that is as you know, the center of our Christian lives. So with that I say, have a wonderful pilgrimage, God bless you, but take the message of Medjugorje with you and live it. In the name of the Father and of the Son and of the Holy Spirit. Amen

Thank you, Lord, for Fr, Al!! Thank you for our priests who help us to live Our Lady’s messages. We need them to guide us. Let’s pray for our priests!