Great news from Archbishop Hoser for the Feast of the Immaculate Conception! 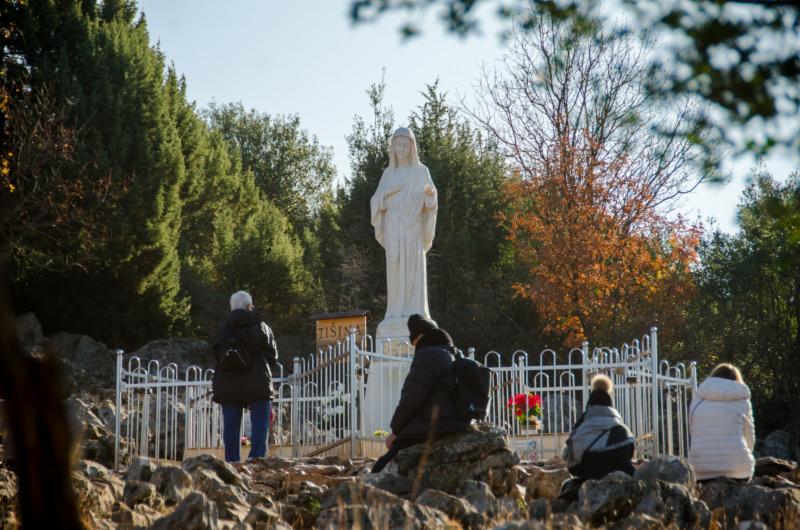 The Feast of the Immaculate Conception of the Blessed Virgin Mary

On this wonderful feast day celebrating our Mother’s Immaculate Conception, let’s pray a prayer of consecration to her Immaculate Heart, which she dictated to Jelena. We want to give ourselves to her, completely!!

Consecration to the Immaculate Heart of Mary
(Given by Our Lady to Jelena Vasilj, 11/28/1983)

O Immaculate Heart of Mary, overflowing
with goodness, Show us your love for us.
May the flame of your heart, Oh Mary,
Descend upon all peoples.
We love you immensely.
Impress in our hearts a true love.
May our hearts yearn for you.
Oh Mary, sweet and humble of heart,
Remember us when we sin.
You know that all mankind are sinners.
Through your most sacred and maternal heart,
Cure us from every spiritual illness.
Make us capable of looking at the beauty of your maternal heart,
And that, thus, we may be converted
to the flame of your heart. Amen

PS. Here is some interesting news that just came out yesterday, through Aleteia.

Archbishop Hoser shares significant news with us about Medjugorje’s status in the Church. This is also a gift to Our Lady on her Feast Day!

Archbishop Henryk Hoser tells Aleteia that it still falls to the pope to make final decision on commission’s report about veracity of reported apparitions.
“The devotion of Medjugorje is allowed. It’s not prohibited, and need not be done in secret,” confirmed Archbishop Henryk Hoser of Warsaw-Praga, Poland, now some months after being sent to Medjugorje by Pope Francis to evaluate not the veracity of the apparitions, but the state of the pastoral care being provided to the thousands of pilgrims who flock to the site every year.
Formerly, pilgrimages to the site were not to be organized by official Church groups, though the faithful could make them privately or through other organizations. Now, the stance on officially-organized pilgrimages will open.
“My mission is precisely to analyze the pastoral situation and propose improvements,” the archbishop told Aleteia, about his assignment at the shrine in Bosnia and Herzegovina, which has attracted millions of people since Marian apparitions reportedly began there in 1981.
“Today, dioceses and other institutions can organize official pilgrimages. It’s no longer a problem,” explained the archbishop, speaking to us from his residence in a Warsaw neighborhood. “Pope Francis recently asked an Albanian cardinal to give his blessing to the faithful present in Medjugorje,” he added.
“I am full of admiration for the work the Franciscans are doing there,” the Polish prelate reported. “With a relatively small team-there is only a dozen of them-they do a huge job of welcoming pilgrims. Every summer they organize a youth festival. This year, there were 50,000 young people from around the world, with more than 700 priests.”
“There is a massive number of confessions. They have about 50 confessionals, which are not enough. These are very deep confessions,” he said.
“This is a phenomenon. And what confirms the authenticity of the place is the large amount of charitable institutions that exist around the sanctuary. And another aspect as well: the great effort that is being made at the level of Christian formation. Each year, they organize conferences at different levels, for various audiences (priests, doctors, parents, young people, couples …)”
“The decree of the former episcopal conference of what used to be Yugoslavia, which, before the Balkan war, advised against pilgrimages in Medjugorje organized by bishops, is no longer relevant,” he said.
There are other cases of locations of apparitions, like Kibeho, in Rwanda, where the diocesan bishop agreed to allow the devotion, and then continued the analysis for the recognition of the apparitions.
The archbishop revealed that the conclusion of the Commission for the analysis of the apparitions of Medjugorje, which Benedict XVI had entrusted to Cardinal Camillo Ruini, appears to be favorable.
“What I find touching is that all the seers have turned to family life,” Archbishop Hoser reflected. “In our day and age, the family is of enormous importance. All of them have a family. Those who were teenagers at the time, are already grandmothers; 37 years have passed!”
“But this decision will have to be made by the pope. The file is now at the Secretariat of State. I believe the final decision will be made,” concluded Archbishop Hoser. (From Aleteia, December 7, 2017- https://aleteia.org/2017/12/07/official-pilgrimages-to-medjugorje-are-being-authorized-confirms-pope-francis-envoy/#.WinZepSjB3w.email
PrevPrevious
NextNext
Current Conditions