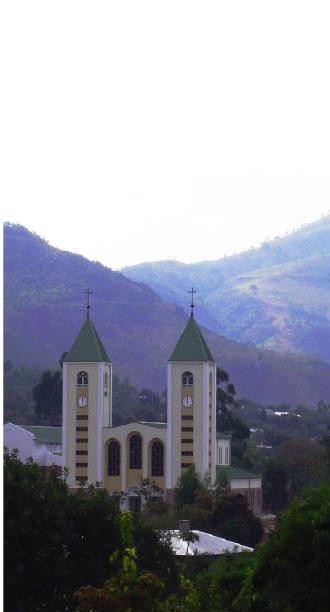 The Fruit of Medjugorje testimony that was introduced last week is a very special one. Gay Russell shares the remarkable events that led to the establishment of a Medjugorje Shrine in Malawi, Africa!! Here is a short version of her testimony that was published in the book, “Medjugorje and the Church” by Denis Nolan.

Gay Russell of Malawi writes: “In September, 2000, I was given a ticket to make a pilgrimage to Rome and Medjugorje…I was agonizing with Jesus for three days preparing for the trip before the Blessed Sacrament, ‘Why Me, Lord? Why am I blessed to go again? What about all the Malawians who can never go?’…On the third day the phone rang, and a voice, obviously long distance, said to me ‘Is that Gay Russell…You don’t know me. My name is Tony Smith. I love Medjugorje and I want to talk to you about this idea I have…I was hoping to build a replica of Krizevac for all the people in England who could not go, but…last night I heard clearly in my heart: “Build it in Malawi for all the Malawians who can never go”. Now I am asking if you could find a mountain near Blantyre on the summit of which we could build the Krizevac Dross and then place the Stations of the Cross up the mountain just like in Medjugorje. I hope you don’t think I am crazy, but it could become a Medjugorje for the Malawians.'”

The Forestry Department gave permission for a replica of the Cross on Krizevac to be built on Mount Michiru and the Archbishop gave permission for the shrine. The bronze plaques depicting the Stations of the Cross were done by Carmello Puzzolo in Italy, identical to the ones he did that are on Krizevac in Medjugorje. (His Rosary plaques, identical to the ones he did for Medjugorje, will soon be placed on an adjoining hill.)

On August 5, 2006, Archbishop Tarcisio Ziyaye of the Blantyre Archdiocese, assisted by Bishop Remi St. Marie of Dedza Diocese and Bishop Peter Musikuwa of Chikwawa Diocese, together with 21 priests from various parishes in the southern region, formally consecrated the new Church, “as an incredible gift from God for all those who cannot go to Medjugorje.” More than 5,000 of the faithful attended the first Mass in St. James Church in Blantyre. “Now that the church is complete the keys can be handed over,” proclaimed Fr. Kanjira, the Diocesan Administrator who was Master of Ceremonies for the celebration. Mr. Armenio Da Costa (the builder) presented them to Gay Russell (the Medjugorje Pilgrim who had overseen the project to its completion), who presented them to Tony Smith (the benefactor), who in turn presented them to the Archbishop, who joyfully handed them over to Fr. Mwapuwa, the parish priest. “At this point great jubilation and ululating broke out in the church; the choir began singing the Gloria, and the church bells rang out loud and clear for the first time. It was wonderful to experience the overwhelming joy!”

Gay states: “I believe that this has been given to Africa since it is now almost impossible for any group from here to get to Medjugorje. To acquire the proper visa African passport holders have to travel to Johannesburg or Cairo for a personal interview beforehand. It is believed one day this will become a very special place of pilgrimage for all peoples of Africa, our tie with the grace of Medjugorje!”

Gay’s beautiful testimony can be found at this link on the Mary TV website:

Thank you, Gay, for your many years of serving Our Lady!! You are an inspiration to all of us! And to Tony and all those who made the Malawi Medjugorje Shrine possible, a big thank you!!

Denis and I (with our buddy Steve) climbed Krizevac on October 13, 2017 early in the morning, in honor of the 100th Anniversary of Fatima, and who should be we meet on the way up but Gay Russell!! Here is our picture together at the Cross!! What a joy! 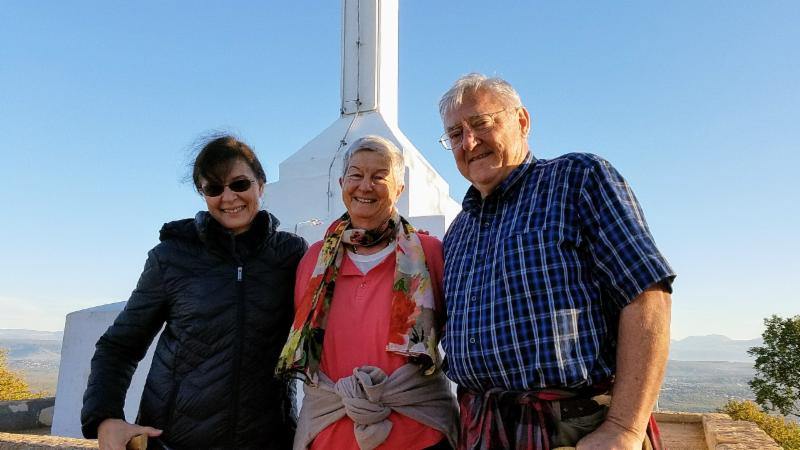